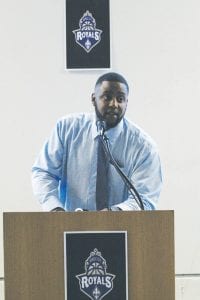 “I’ve got to tell you guys that I am excited this morning. I really am to be in the City of Flint for the New Era Basketball Association,” said league commissioner Dominique Wilford. “We’re a professional, national league with 18 teams around the country. One of the reasons we chose the Vehicle City Royals is because I believe in the City of Flint. I believe in what you guys stand for; getting up in the morning and grinding; hard work. That’s one of the main reasons that we chose Flint as a destination for our league.”

Fans throughout the Flint area won’t have to wait long to see the team in action for the first time. In fact, if you can’t make the game, you still have the opportunity to catch the action.

“Play will begin in April. April 9th is (Vehicle City’s) first game against our Detroit Coast-to-Coast team and that will be broadcast on our network, NETV,” added Wilford. “Unlike other minor leagues around the country, we are the first minor league to have their own television network.”

The league publicizes itself quite well on many different outlets and provides its players with a chance to progress beyond the NEBA.

“Our league is unlike any other professional league in the United States because of the different platforms that we offer our teams,” said Wilford. “With our television network, with our league magazine, with our showcases it will be unlike anything you’ve ever seen in the entertainment and sports world.”

It took a lot of time and effort to bring the team here, but team owner Mykel Darrough’s months of work finally came to fruition. The Royals will be the first professional basketball team to play in Flint since 2001, when the Continental Basketball Association’s Flint Fuze moved to Birch Run.

Darrough wanted to help leave his mark on the city, noting the lengthy history that Flint has on the hardwood.

“This all started months ago with just coming up with the right thing to brand the city and I felt that this would be a perfect opportunity for our athletes to excel,” Darrough continued. “Flint has always been known for its basketball tradition and we take pride in our effort that we put on the court. I figured the best thing to do would be to provide an outlet for our players to progress and go to the next level.”

The Royals will be playing all of their home games during the 2016 season at Carman-Ainsworth High School.