Progress made on three new restaurants

Construction is well underway at the new Chipotle’s on Miller Road next door to Panera.

FLINT TWP. — It is turning into a banner year for new places to dine out.

At least five national restaurant chains have located in the township in the past 12 months or plan to do so. Most of them involved new construction.

Next up are a Chipotle Mexican Grill and a Potbelly Sandwich Shop, both new builds on Miller Road.

Potbelly appears to be closest to completion. It is one of three businesses going into a small strip plaza at 4148 Miller Road, next door to Texas Roadhouse, No opening date has been announced but the company has posted ‘now hiring” for Flint notices on its web site. Six positions posted include an associate, an associate-backline coordinator, an associate-food prep, a delivery driver, a shift leader and a musician. 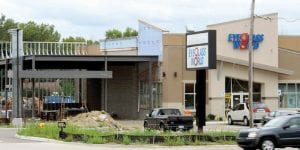 Construction appears close to completion for a new Potbelly Sandwich Shop on Miller Road, next door to Texas Roadhouse.

You read that right.

“Music is an important part of the Potbelly experience,” according to the job posting. “Our musicians positive energy and great song selections make our customers really happy. We love popular tunes of the 70s, 80s and 90s and today performed with an upbeat vibe.”

Based in Chicago, Potbelly is a publicly traded chain with more than 270 locations in 18 states and Washington D.C. Touting fresh ingredients, they sell submarine sandwiches, salads, hand-dipped shakes and fresh-based cookies.

No word yet on the other two tenants who will be Potbelly’s neighbors in the plaza.

Site plans for the Chipotle restaurant were approved in late February but construction did not begin until mid-summer and is ongoing.

But for anyone interested in getting a foot in the door, the Denver, Coloradobased company has announced the first ever Chipotle Mexican Grill Chipotle National Career Day aiming to hire 4,000 workers in a single day. Open interviews will be held from 8-11 a.m. at all Chipotle restaurants, including those in the Detroit area, Lansing, Saginaw and Ann Arbor. Advance registrations are being taken online at nationalcareerday.com/

Last but not least are recent signs of progress on a proposed IHOP restaurant to be located at 3227 Miller Road, formerly Salvatore Scallopini that closed in late June after 28 years.

Salvatore Scallopini and tearing down a neighboring building that operated for many years as a Wendy’s and most recently as Happy’s Pizza. The Wendy’s/Happy building will be razed to provide parking, according to building plans filed with the township.

An addition to the IHOP building will expand seating to 224. The site redevelopment plans also calls for extensive landscaping and a restructured parking lot.

There have been no signs of activity on the site for about two months but dumpsters were brought in about a week ago and are being filled with construction debris. No new information is available on how soon to expect the popular pancake house to be up and running.