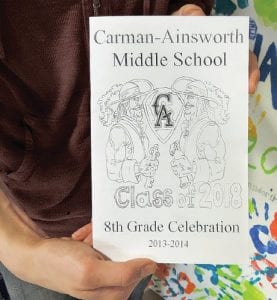 Above, aspiring graphic artist Josh White created the cover art for the eight-grade celebration program. Left, Ayanna Johnson’s design beat out seven others in a contest for the centerpiece Class of 2018 logo used on the colorful art canvass that will hang on the wall at CAMS until their graduation year when it will be moved to the high school.

FLINT TWP. — It was a banner year for eighth-graders at Carman- Ainsworth Middle School as they began the final stretch of their K-12 years with a celebration ceremony May 30 held at the high school.

Several students actively participated in several contests and projects to make the graduation ceremony a success. CAMS teacher Sandra Worthing wanted to make sure they get credit for it.

“The students … worked hard on designs for our end of year celebrations and events,” Worthing said.

One project was literally hands-on, as all 346 members of the Class of 2018 painted their palms bright colors and placed their prints on a framed canvass surrounding a logo created by a class member. Ayanna Johnson beat out seven others in a contest for the honor of having her design become the centerpiece of the colorful art piece. The canvas will be mounted alongside those of previous classes in the halls of CAMS until 2017 when it will be moved to the high school for their senior year, Worthing said. 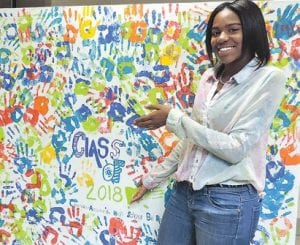 A group of students also spent about seven hours — finding time between classes —to work on a huge “Class of 2018” banner that was draped across the front of the high school gym as a backdrop for their graduation celebration. Evangelina Dang penciled in the calligraphy letters for the banner and other students pitched in on painting them blue.

It took a long time because the long banner had to be laid down the hallways to paint and rolled back up each hour during class passing time to keep it from getting stepped on.

Evangelina also is credited for winning a contest to produce the winning design for Class of 2018 T-shirts.

Josh White, who aspires to become a graphic artist when he grows up, garnered accolades for a drawing of two Cavaliers used as cover art for the graduation program. 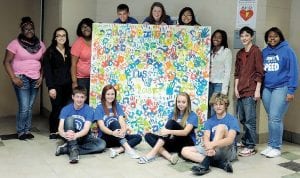