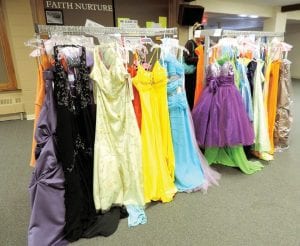 Nearly 100 prom dresses – including 50 new ones – were offered free to CAHS students at a giveaway last Monday and Tuesday sponsored by Carman Cougar Charities.

FLINT TWP. — Like a field of spring flowers ripe for picking, about 100 formal gowns displayed on racks in the fellowship hall at Resurrection Reformed Church were up for grabs during a two-day giveaway for students at Carman-Ainsworth High School. That’s right. Free.

The event was sponsored by Carman Cougar Charities (CCC), a group formed last summer with the sole mission to support Carman-Ainsworth students in any way that it can. The group got started when alumni of the defunct Carman High School joined forces to organize an all-class reunion. Carman High School merged with Ainsworth High School in 1987.

Nearly 900 people attended Carman Cougar “Restore the Roar” reunion events over a five-day span last September and the group is planning another one this year, said Wanda Emmerling, president of Carman Cougar Charities and a 1970 Carman High School graduate.

The prom dress giveaway is just one of the group’s helpful efforts over the past six months, funded by proceeds from the very successful first reunion. It started with a donation of about 50 new gowns from a going-out-ofbusiness formalwear shop owned by Carman alumni, said Peggy Suess, giveaway organizer. As the word spread, more dresses wore donated. Some were new, some worn only once. All were freshly dry-cleaned and ready to wear.

The giveaway was held at the church because the school did not have a secure location for dress storage before the event, she said. Other giveaway items included nail polishes, jewelry and purses.

CCC asked that the young ladies return the dresses after the prom so they can be passed on to others next year, but that is not mandatory. Depending on this years’ turnout, the charity group hopes to offer the giveaway again next year, Seuss said.

Another upcoming CCC support effort will be awarding the first annual Carman Cougar Scholarship, said Emmerling. A scholarship committee has received five applications for the $2,500 scholarship. The recipient will be announced on June 2 at the CAHS Honors program.

The winner will be chosen more so on the basis of community service work than grade point average, Emmerling said.

“We are about volunteerism and kind of wanted to reward a student who started their life out that way.”

CCC also is the funding force behind the creation of the Cougar Closet. The purpose is to provide students who need them with basic necessities and personal care items such as toothpaste, lotion and deodorant. The first closet is established at the high school and a second one is being set up at the middle school, Emmerling said.

Distribution is handled discreetly. Students who want to use the resource make arrangements through their guidance counselor.

Yet another CCC activity was a donation of 350 snow boots and snow pants to needy elementary school students last winter. A list of needs was generated through contact with the school principles and counselors, Emmerling said.

CCC purchased and packaged the items and delivered them to the schools. They plan to repeat that effort next winter.