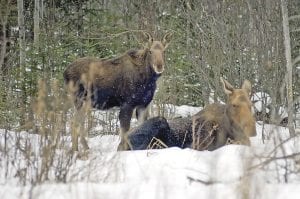 Michigan’s moose herd numbers, as well as feasibility of a limited hunt, has both sides arguing as the state Legislature nears the end of its 2010 session.

STATEWIDE
– Seeking to stop Gov. Jennifer Granholm from signing a bill that would establish a council to begin a one-year feasibility study on a limited moose hunt in Michigan, a group of state biologists has protested the bill via a letter sent to the governor Monday, Dec. 20.

Led by Michigan Tech University moose expert Rolf Peterson, about a dozen other state biologists reportedly signed the letter. Their concerns may fall on deaf ears however, as Granholm spokesperson Katie Carey told the Associated Press that Granholm likely will sign the legislation after it cleared the Legislature with very little opposed.

Bill sponsor Sen. Jason Allen, RTraverse City, seeks to create an advisory council that would be charged with determining just how many moose Michigan has and how many could be hunted in a limited hunt. Allen reported in an article in the Detroit Free Press that estimates show around 1,000 moose in the Upper Peninsula. Isle Royal also has a moose population, but it is federally protected and cannot be hunted.

Another proponent of the legislation, Rep. Joel Sheltrown, D-West Branch, was quoted as saying, “If we don’t get them, the wolves will.”

The larger problem appears to be discrepancies in the number of moose in the Upper and Northern Lower Peninsula. State DNR biologists disagree with the 1,000 quoted by Allen, saying their number is far fewer, around 500 in the U.P.

Peterson noted that Michigan’s moose herd has barely reached half the projected number as anticipated in the mid-90s after officials transferred 59 moose from Algonquin Provincial Park in Ontario to western Marquette County in efforts to boost the existing population.

DNRE, Michigan United Conservation Clubs and others are all for the limited hunt, pinpointing 12-15 moose yearly could be harvested without adversely affecting the overall population.

DNRE moose specialist Brian Roell told the AP that the DNRE uses an aerial count to estimate the state’s moose herd and as of 2009, the numbers showed approximately 420 in the western U.P. and only about 100 in the eastern U.P.

The health of the Michigan herd is also in question and under debate from both sides, as low pregnancy rates, high mortality and disease continue to keep the moose herd from growing. A high population of white-tailed deer is partly to blame, as a carrier of a brainworm parasite that is fatal in moose. Warmer temperatures in the U.P. also threaten the herd, which prefers colder weather.

As with every other hunt that has been established in the state, opponents claim that the state’s “scientific basis” is flawed, while proponents look to the NRC to use common sense, the scientific numbers, and not economic impacts.

If approved, the Director of the Dept. of Natural Resouces, House and Senate leaders, and a representative of the Native American Tribes will appoint the council.

If a hunt was approved, the NRC would determine the season and rules adopted under the legislation. A moosehunting license would cost $100.

The official end of the current legislative session was yesterday, Wednesday, Dec. 28. Even if the bill is passed, a hunt is not imminent, as the council would have to spend the year evaluating the feasibility, working with the DNRE, NRC and others to get a more accurate count of the moose herd. Only then would that report go to the NRC, which would decide when, where, and if such a hunt is good for Michigan’s moose herd.