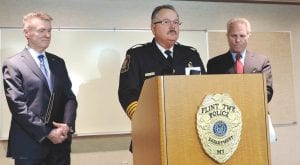 FLINT TWP. — A hearing Monday morning, March 9, in 67th District Court will determine the fate for the next year of the Hometown Inn, 3277 Miller Road.

At a press conference on February 26, Genesee County Prosecutor David Leyton announced that his office aims to padlock the motel for at least a year, under a Complaint for the Abatement of Statutory Nuisances. The legal complaint, filed in 67th District Court, cites Inn owners and managers and documents numerous instances of prostitution, armed violence, domestic violence and narcotics activity. Police records show about 40 incidents have occurred since January 1, 2013, at the Hometown Inn, but this year’s January 23 shooting of a police officer on the premises was the “straw that broke the camel’s back,’’ Leyton said.

Leyton said his office has obtained a temporary restraining order from 67th District Court Judge David Goggins, barring further room rentals at the motel prior to the court hearing on Monday seeking a permanent injunction to shut it down. The temporary order prevents hotel operators from accepting more customers before the hearing. 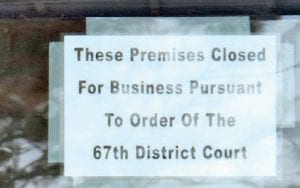 Pickell said his civil division officers will take charge of padlocking the 119-room motel, if so ordered, following the March 9 court hearing and also will assist residents in relocating. Leyton said that currently about 35 people are living there.

Chief Sippert recounted events leading to the Jan. 23 shooting at the motel that resulted in serious injuries to both Officer Michael David Schuyler and the suspect, Christopher Aaron Washington, 55. who was staying at the motel. Leyton has charged Washington on 18 counts including assault with intent to murder. Flint Township Police have answered many of the calls at the Hometown Inn and gathered the statistics used to draft the nuisance complaint, Leyton said, noting that nearby business owners are also fed up with constant problems at the motel. 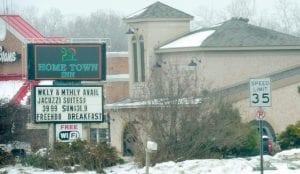 Hometown Inn on Miller Road has about 119 rooms including about 35 rented by month-tomonth tenants.

“I have spoken to a number of business owners and their representatives that do business along Miller Road,’’ he said “Each of them have told me that they have had instances wherein their businesses have been interrupted by Hometown Inn residents and by incidents that have occurred at the Hometown Inn.”

The law allows for shuttering premises that cause constant disturbances in the community, he said.

“Hometown Inn has been unable to control the criminal activity that permeates its property.”

Chief Sippert said that the officer shot on January 23 was patrolling that area because it is known to be an area victimized by criminal activity.

“The Flint Township Police Department’s resources are utilized at an alarming, disproportionate level responding to criminal activity at the Hometown Inn as compared to similar businesses located in the same area,’’ he said. “This impacts the neighboring businesses as well as the entire Flint Township business community.”

Immediately after the officer was shot, Chief Sippert said he contacted Leyton’s office for help addressing the problem. Sheriff Pickell said his paramedics had been called to the motel as recently as Feb. 24, two days before the press conference, in response to the drug-related death of a 19-year-old-woman. She was found on a bed with her mouth taped and notes instructing that the body not be disturbed, he said.

At least five calls were documented for heroin overdoses at the motel in 2013 and 2015.

The complaints also cites about 11 incidents of armed violence on the premises including armed robberies, home invasions, shots fired and felonious assault. Leyton said that armed violence is a new category being added to public nuisance statute. Before it covered only prostitution and drug dealing.

To get the public nuisance statute expanded to include acts of violence, Leyton said he recently testified in Lansing before the State House Criminal Justice Committee which enacted a bill that will become effective on March 31. Leyton said this is an important point to make to those who say the criminal element evicted from the Hometown Inn will just go somewhere else.

“Let the word go forth that we will file as many of these Public Nuisance Actions as necessary to ensure the public safety,’’ he said.

“It is unfair that the vast majority of business owners who operate their establishments within the rules, for another business to go ahead and act badly and destroy what the legitimate businesses have worked so hard to achieve.”

Leyton also stressed that shutting down the motel is not a forfeiture action.

“We are not taking anybody’s property,’’ he said. “ We want people to hold property and to use it for legal purposes but when we have repeated instances of drug trafficking (etc). you are not using your property for legitimate purposes. That is why we are asking for a time out.” Sheriff Pickell said that his officers and township officers would monitor the property during the one-year shutdown to ensure that it is not operating or being used by squatters.