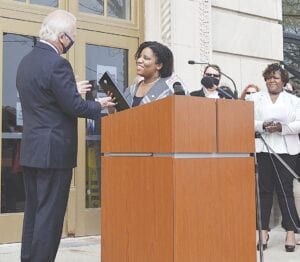 On Monday, Leyton and Holloman were honored with an awards ceremony outside the Genesee County Courthouse to coincide with National Crime Victims Rights Week. Leyton received the Champion for Crime Victims Award, while Holloman, Executive Director of the Voices for Children Advocacy Center, was also recognized as the local Victim Advocate of the Year.

State Rep. John Cherry, who presented Leyton with the Champion for Crime Victims Award, commended the county prosecutor for his ability to focus on the wellbeing of crime victims during cases and criminal prosecutions.

“Something that stands out to me in (Leyton’s) character is how greatly he cares about people and the tremendous amount of empathy that he has for those who are suffering,” Cherry said. “There is no better prosecutor I’d like to work with than Prosecutor Leyton.” 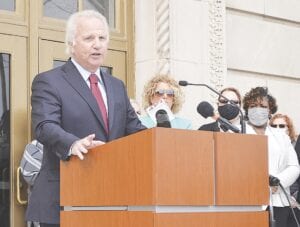 For his part, Leyton said that the award is a “team effort” and belongs to his entire staff for helping crime victims navigate the criminal justice system.

“Our staff’s goal is to make sure that victims of crime are the number one focus,” he said. “That means guiding people who aren’t familiar with the criminal justice system, from telling them where to park and what courtroom to go to, to answering their questions like ‘What am I supposed to say?’ or ‘Will I be cross-examined by the defense lawyer?’ Those are just some of the skills that our victim advocates, assistant prosecutors and support staff bring to this job.”

The Champion for Crime Victims Award is handed out annually by the Michigan Crime Victims Foundation, which was established in 1992 to assist victims of crime who are facing critical, life-altering financial needs.

Holloman, who has been the executive director for Voices for Children for six years, received the Victim Advocate of the Year recognition for her work with local children who’ve been abused, neglected and/or trafficked.

“This award belongs to the children,” she said. “They’re the brave ones who not only tell their story but also process the trauma to start healing.”

As her work relates to the criminal justice system, Holloman said that she and her staff help child victims understand the basics of what they need to do in a court case so that justice can be served.

“It starts by believing them and providing them with whatever service they need,” she said. “Sometimes, it’s listening, sometimes it’s sitting in a courtroom with them. And sometimes it’s just as simple as saying ‘I support you.’”

National Crime Victims Rights Week, an initiative started by the U.S. Department of Justice, is observed each April to remember crime victims and survivors and to honor those who have gone above and beyond in their service to victims and their loved ones.