Prosecutor shuts down Hometown for 3 months 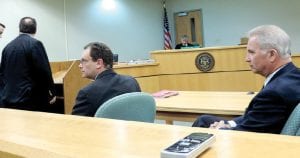 The Hometown Inn has been closed for business since Feb, 26 when Prosecutor Leyton filed a Complaint for the Abatement of Statutory Nuisances in 67th District Court. Leyton obtained a temporary restraining order and asked the court to shut down the motel for one year due to an extensive history of prostitution, armed violence, domestic violence and drug trafficking and use on the premises.

Minutes before a scheduled show cause court hearing on Monday, Leyton and attorneys for owners of the Hometown Inn went into a two-hour conference to work out an alternative resolution.

The owners have agreed to several remedial steps within the next 90 days to try to rehabilitate and improve conditions at the premises in the interest of the public’s health, safety, and welfare. During the 90-day time frame, after improvements have been made, they may petition Prosecutor Leyton to re-open for business upon his satisfaction and approval.

Some of the improvements to be made are increased security including security guards working 24 hours a day, seven days a week; a security gate at the entrance; fencing around the property; and surveillance video equipment to monitor activity.

Patrick McCombs, assistant prosecutor, read into the court record details of the agreement that include:

• Permit the Flint Township Police canine unit to check the premises for drug activity at any time, day or night, without advance notice and conduct room searches, if needed.

• Provide 24-hour security guards until the end of September after which may be reduced to dusk to dawn patrols.

• Install high resolution, high definition video surveillance equipment in the lobby and common parking areas and to keep recordings for at least 30 days for access by law enforcement.

• Require future guests and visitors to provide a driver’s license and license plate number at check-in and to make information available to Flint Township Police on request. Guests also will be required to park facing inward only to allow visibility for police to check plates.

• Maintain a do-not-rent-to list of people known to conduct disturbances on the premises and to allow Flint Township Police to add names to that list.

• No subleasing, meaning that the person who rents the room rent it to someone else.

• Post signs conspicuously notifying guests that the premises is under video surveillance.

• Close entrance off Claude Avenue at the southeast portion of the property, if in accordance with fire codes.

• Not allow in-county residents to stay longer than seven days except with proof of extenuating circumstances such as a need for temporary shelter due to a house fire.

• Immediately expulsion, without refunds, of guests found engaged in criminal activity or other violations.

Leyton estimated that the agreed-upon remedies amount to about a quarter of a million dollar investment and said that if they are not done, the motel will not reopen.

He also said he preferred this “paper padlocking” to the more severe one-year padlocking that could have resulted in a vacant property and blight.

“I want a property that is safe for the community and crime free,’’ he said.

Leyton said he plans to exact a stricter nuisance law, effective March 31, to employ similar measures against other problem businesses, if necessary.

In the initial legal complaint, Leyton cited police records dating back to January 1, 2013 which documented more than 40 criminal incidents at the Hometown Inn including this year’s Jan. 23 shooting of a Flint Township police officer by a motel resident who has since been charged with 18 criminal counts.

Leyton said he believes the mandated remedies will alleviate problems at the motel by giving them better control over who is coming and going.

Future guests will be subject to stricter security checks.

“I think it will lead to far less crime and probably no crime and therefore a legitimate establishment. That is what the business owners in Genesee County want and what I want,” Leyton said.

David Salim, attorney for Hometown Inn owners Malik Abdulnoor and Tahir Jabero, expressed appreciation for the Leyton’s willingness to work with them.

Based on legal statutes the prosecutor could have chosen remedies detrimental to the property owners, leaving the property vacant for a long time, he said.

Insteadtheyhavereachedaa“community” agreement beneficial to all involved parties including police and nearby business owners.

At the same time, Hometown Inn owners recognize that problems cited are not exclusive to their business but want to demonstrate willingness to remedy problems.

Salim said he did not know how many tenants are still living at the Hometown Inn but eviction proceeding will begin immediately, as agreed.

Leyton said that remaining tenants have been working with Resource Genesee to find other accommodations and he expects everyone to be out by the end of the month.