Public hearing set for DDA and other economic development zones 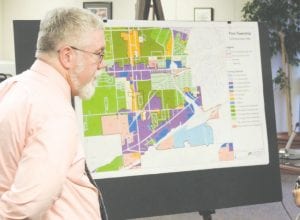 Doug Piggott of Rowe Professional Services and Tracey Tucker, township economic enhancement director, first presented proposed DDA and CIA districts to the Economic Development Corporation for its approval. Then, Tucker presented those plans to the township board which has scheduled a public hearing.

FLINT TWP. — Public hearings have been set at 7 p.m. Dec. 18 for a proposed establishment of a Downtown Development Authority (DDA) and two Corridor Improvement Authorities (CIA) in the Beecher Road and Bristol Road areas.

The hearings will be held during the township board meeting at the Township Hall at 1490 South Dye Rd.

The township board has approved resolutions of intent to form the economic development districts to redevelop commercial, halt property devaluation, eliminate causes of deterioration and promote growth.

Both a DDA and the CIAs are needed because a DDA is required to have contiguous boundaries. The two CIA’s are proposed to extend economic development funding to other commercial areas in the township.

Once DDA boundaries are set they can be reduced but not added to, said Tracey Tucker, township economic enhancement director, who worked with Doug Piggott, a planner at Rowe Professional Services in Flint, to draft the proposed boundaries for the DDA and CIAs. Piggott was hired by the township to assist with legal requirements to establish the DDA and improvement corridors. 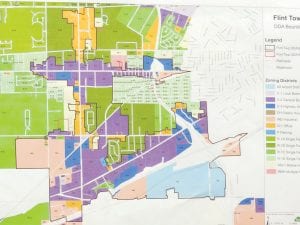 Maps and details for the proposed DDA and CIAs can be viewed on the township’s web page at www.flinttownship.org.

The boundaries of the proposed Bristol Road Corridor Improvement Authority generally are located along Bristol Road from Holiday Drive to Fenton Road.

Boundaries for the proposed Beecher Road Corridor Improvement Authority generally are located along Beecher Road from the township border to the east and Calkins Road to the West.

The board is working under a tight timeline to set up the proposed districts by May in order to be able to use 2016 property values as the base year for the plan which will draw funding from the establishment of Tax Increment Financing based on growth.

In addition to publicizing the plans via media and public postings, notices about the public hearings must be mailed to all property owners within the proposed district boundaries.

After the public hearing, there must be a 60-day opt out period for other taxing jurisdictions such as the county.

The schedule also calls for appointing a nine-member DDA board by mid-February, of which 51 percent must be property owners or operate businesses within the proposed district.

If all goes according to plan, township officials hope to meet with the DDA board in late February to begin review of potential DDA projects. A consultant will have a DDA TIF and Development Plan drafted by mid-March. Public hearings for that plan would be announced in April and held in May with a final ordinance adoption aiming for late May.

Eligible people interested in serving on the DDA board or the five-member CIA boards are asked to contact township officials. By law the township supervisor serves as one member of the nine-member DDA board but can appoint a representative to serve on the CIA boards.