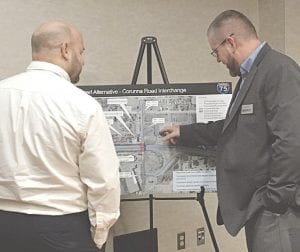 Keith Brown, left, and Craig Innes, both with the Michigan Department of Transportation Davison Transportation Service Center, look over a drawing of the proposed reconstruction of the Corunna Road interchange during a public input meeting Dec. 11 at the Flint Township Police Department. Photo by Jalene Jameson

FLINT TWP. — The public crowded into a packed meeting room Dec. 11 to hear details of a Michigan Department of Transportation preferred alternative plan to reconstruct Interstate 75 in the area of Interstate 69.

The massive $539.2 million project calls for the reconstruction of I-75 from US-23 to Court Street and the interchange of I-75 and I-69, a hightraffic area where problems include a high crash rate, potentially dangerous merges and heavy traffic congestion. The plan calls for building I-75 into an elevated span above I-69 and CN Railroad property; ramp work at Bristol, Miller and Corunna roads; and adding collector and distributor roads to separate through-traffic from vehicles trying to take ramps on or off. The plan also would eliminate two pump stations, which would alleviate flooding.

During the meeting at the Flint Township Police Department, several drawings were set up around the room showing how the various areas of the project would look, including drawings of Corunna, Miller and Bristol road entrances and exits and the I-75 elevation over I-69.

“The reasons for this really is the condition of I-75 and I-69 around the interchange,” said Project Manager Trevor Block. “This was all built in the early 1960s. Everything has been replaced since then, but something this size takes a lot of effort upfront and a lot of teamwork to get to what can be done. With that area coming up on the end of its life here, we need to do something.”

Block said several meetings were held with stakeholders and the public to garner responses about what they don’t like about the I-75/I-69 area. Paul Carr, a consultant with HNTB Corp., which developed the preferred alternative, discussed several outcomes of the proposed plan, including:

Reduces flooding potential and road closures along I-75.

Provides collector/distributor facilities for access to system and local ramps.

Minimizes railroad impacts/ coordination. Will not have to replace any railroad.

Carr said the work would be broken down into four phases or packages, including where work will be done, how long the work will take and how much it will cost, as follows:

Block said the impact to traffic during the project would involve basically vacating I-75 and using I-475 as a detour. There are a couple of scenarios still being considered for US-23 traffic. The project is not part of MDOT’s current five-year plan, and Block said the earliest the project could get under way would be 2026. He said the next couple of years will be spent securing funding and completing environmental impact studies.

“A project of this size, we really have to work far in advance,” Block said. “We’ve been trying to vet some options and come up with workable solutions. We don’t have an exact plan, but we’re hoping in the next 10 years we’ll be heavily working on this project.”

This was the final presentation for gathering public input.