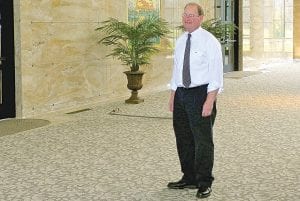 John Koegel stands near the committment ceremony area in the spacious light-filled Chapel of Angels Mausoleum at Sunset Hills Cemetery.

FLINT TWP. — The Chapel of the Angels Mausoleum at Sunset Hills Cemetery is ready to open its wings.

To give the public an up-close look at the detail and design that went into it, an open-house and dedication will be held from noon to 3 p.m. on Sept. 18, said Kathryn Koegel, board chairperson for Sunset Hills, and member of the Koegel Meats family who own the cemetery. The event will include a ribbon cutting, dedication prayer and half-hour concert by the Mastersingers, she said.

“We debated about having a public dedication because some people are hesitant about coming to a cemetery,’’ Koegel said “We want the public to have an opportunity to see it.’’

The locked and gated building is not otherwise open to the public.

After several years of planning and two years of construction, the 17,200 square-foot T-shaped structure was completed this spring. It is a meticulous blend of function and design with soaring columns and locally commissioned artwork inside and out, Italian marble walls and floors inside, granite walls outside and clerestory windows to admit sunlight into the vaulted interior.

The elegant edifice was recently featured in the July edition of ICCFA Magazine, a trade publication for the International Cemetery, Cremation and Funeral Association.

A new mausoleum was needed because the cemetery’s old one, built is 1926, has been full for years.

It was done during development of the northern part of the cemetery which included laying roads and building a second entrance with custom designed gates off Pasadena Avenue, said John Koegel, president of Koegel Meats and a member of the cemetery board along with their parents Albert and Barbara Koegel, a well-known interior designer.

With 1,288 crypts and 1,200 niches for cremation urns encased in the interior and exterior walls, Kathryn Koegel said she expects this new facility to serve as a final resting place for many years. A divided half wall in front of the building as well as a block at the back entrance also contains niches for cremation urns. Black granite blocks at ground level are for commemorative engravings for people who want a permanent grave marker but have chosen to spread the ashes elsewhere, Kathryn Koegel said.

The mausoleum is closest to and visible from the new Pasadena Road entrance which connects via a series of roadways to the original cemetery entrance off Flushing Road.

Four bas relief stone sculptured angels, representing the seasons, are affixed to the outside front and back walls. Local sculptor Suzanne Johnson of Grand Blanc sculpted them in clay. Those images were then traced into stone using special computerized stone-cutting machinery, Kathryn Koegel said.

Inside, the creamy marble interior walls are nicely contrasted by five glass mosaics designed by local artist Mark Davidek. Four of the vivid designs represent the seasons and the fifth depicts a sunset.

Kathryn Koegel said the cemetery was bought by her grandfather Albert Koegel in the 1920s. Initially he was an investor but eventually bought out the other shares.

“This was his hobby,’’ she said. “He could come out here and plant trees and lay roads.. “With the meat plant as a source of income, he was able to build a substantial perpetual care fund for the non-profit cemetery.