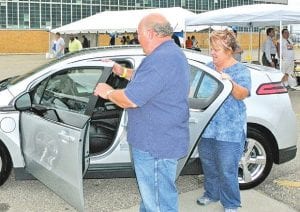 GM worker, and his wife Bonnie get ready to test drive a Chevy Volt during GM’s three-day vehicle show at Flint Metal Center on Bristol Road.

FLINT TWP. — Gerald Giammarco of Holly and his wife Bonnie climbed into a silver Chevrolet Volt to take it for a 10-minute test drive around the block.

“Got to see what the company has to offer,’’ said Giammarco, a General Motors retiree who worked at Buick City until it closed and finished his 38-year career at the Lake Orion plant.

Giammarco said he wasn’t sure if he was interested in purchasing the electricity-powered car but “you never know.’’

Thousands of test drivers like the Gianmmarco’s got the chance to make up their minds after taking a spin behind the wheel during GM’s three-day vehicle show at the Flint Metal Center plant on Bristol Road, which wraps up at 7 p.m. on Sept. 15. All four GM brands were available including a Cadillac CTS, Escalade and SRX and a Chevrolet Cruze, Equinox and Camaro.

Despite rain threatening on the first day, crowds were out early to be first in line for their favorites. Interest was high in the Chevy Volt which started the day getting charged up.

But after the first two hours, interest in driving a Camaro, including a convertible, led the pack, according to a tally by Kim Blount, a GM analyst helping to staff the test-drive sign-up station.

The event targeted car shoppers but several vendors were on hand to entertain and educate the crowds including a food tent and chances to win prizes.

Standing out in the crowd were the ladies of the Red Hat Divas club wearing their signature purple dresses and red hats. They were invited to the show by Dani Dye, marketing specialist at Patsy Lou Williamson Automotive group, which supplied some of the cars on show.

The Divas decorated a red Buick Enclave with an showy pile of hats and banners.

Joe Sejnowski of the GM Warren Tech Center was more than happy to show off the finer points of a Cadillac CTS coupe he was chaperoning in test drives.

The fully-loaded all-wheeldrive had perks like a telescoping steering wheel, leather seats vented for air-conditioning and fold-down back seats for added cargo space in the trunk. It also had a panoramic sunroof, individual climate control operations, front and back cupholders and three built in lighter ports for powering laptops, GPSs, MP3 players and other electronic devices.

The car was introduced in 2010 but won’t be changed much in the 2012 version coming out next month, Sejnowski said.