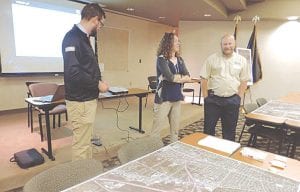 MDOT presented an aerial view of the portion of I-75 to be reconstructed, outlined in red. Photos by Rhonda Sanders

FLINT TWP. — The Michigan Department of Transportation (MDOT) held a public open house last week in the process of developing a long-term plan to rebuild I-75 from US-23 to Court Street and at the I-75/I-69 interchange.

MDOT has identified this corridor as a potential site for future improvements to address aging infrastructure, increasing safety, and the existing and future freeway configuration.

The year 2026 is the earliest targeted date for actual construction to begin but planners will begin developing practical alternatives this month with a goal to present a preferred plan by February 2019, said Paul Carr, project manager for HNTB, an architecture, civil engineering consulting and construction management firm based in Lansing.

MDOT held one previous stakeholders meeting, that was attended by Flint Township officials. Much of the targeted five-mile stretch of interstate is located in Flint Township. 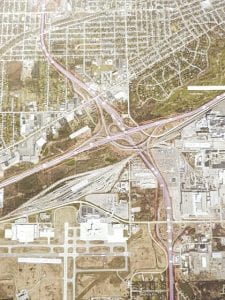 HNTB has conducted a traffic and accident analysis of the road, projecting out to the year 2050, said Danielle Booms, HNTB traffic engi- neer. They looked at a.m. and p.m. peak traffic times to analyze congestion and causes of accidents. It shows potential for some p.m. problems by 2050, as traffic grows.

Safety is another concern. An analysis of freeway crashes for the past five years looked at time of day and specific recurring problems. On northbound I-75, most crashes occurred south of the I-69 interchange near the Bristol Road ramps. Another trouble spot is north of I-69 near Corunna road.

On southbound I-75, most crashes were concentrated near the I-69 and I-75 interchange.

Input gathered from stakeholders at a previous meeting included short acceleration distances at Bristol Road and having to cross two lanes from Miller Road to southbound I-75 to merge onto the freeway, Carr said. Better freeway lighting was also cited.

The project also is taking into consideration access to the large number of automotive business on Bristol Road. 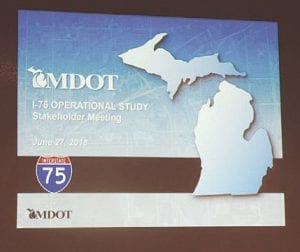 One question raised at last week’s meeting concerned managing truck traffic along I-69.

Another question was about innovative ideas being used elsewhere in trouble spots to reduce crashes. Carr said that separate roadways such as the I-96 service drive near Detroit is one example.

Another question was whether the 2026 project here would require land acquisition.

“We will try to stick with the footprint we have,” said Keith Brown, operations engineer, for the Davison Transportation Service Center. But he added that some right-of-way expansion could become part of the finalized plan.

Carr said that more stakeholder meetings will be announced as the project moves forward. Anyone with suggestions or comments on I-75 improvement can contact Brown at 810-653- 7470 or by email at brownk4@michigan. gov.