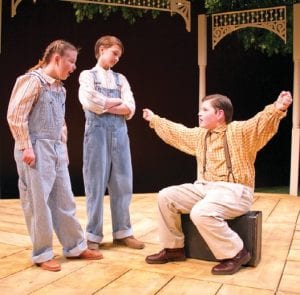 FLINT — Flint Youth Theatre’s production of To Kill a Mockingbird is Scout Finch’s coming of-age story during a turbulent time in American history.

This is the fourth production in the 2010-2011 Signature Series with the season theme of RITES OF PASSAGE: Life Lessons and Stories About Coming of Age and runs April 8 through 23.

To Kill a Mockingbird is based on the novel by Harper Lee and adapted by Christopher Sergel. This production is directed by FYT Executive Artistic Director, William P. Ward, choreographed by FYT Associate Artist, Margaret A. Mead- Finizio and co-designed by Ward and Artistic Director Designate, Jeremy Winchester. 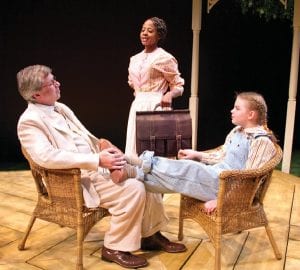 Set in Alabama in 1935, To Kill a Mockingbird traces Scout’s coming-ofage experiences during a turbulent time in our country’s history. Her father, Atticus, is defending Tom Robinson, a black man on trial for an unspeakable crime. As the trial progresses, Scout witnesses her community in a tense tug-of-war between justice and racism and begins to realize she must form her own conclusions about right and wrong. Adapted from the Pulitzer Prize-winning novel by Harper Lee, this American classic compels audiences to take an honest look at America’s past and people’s moral responsibility to one another today.

To Kill a Mockingbird director Ward, reflected on the inspiration for this production, “In this particular slot in the season we originally had scheduled a production of Our Town but when the horrific shootings in Tucson, Ariz., occurred in early January, I realized that situation to be one of those pivotal events in our country to which FYT has responded, many times, through the creation of a theatrical production. I knew what happened in Tucson was calling to us to speak out. And then somehow, out of nowhere, the idea of To Kill a Mockingbird popped into my head. This is a play we have wanted to produce for years and when I re-read the script with Tucson in mind, I was bowled over by the nuanced way in which the story responds to what happened in January but also how, at its core, lies a classic coming-of-age story.”

To Kill a Mockingbird is sponsored by Citizens Bank and The View Newspapers. Flint Youth Theatre’s 2010-2011 Signature Series, RITES OF PASSAGE: Life Lessons and Stories About Coming of Age, is generously supported by the Ruth Mott Foundation.

On April 18 at 5:30 p.m. FYT will host From Page to Stage, a special fundraising event showcasing how a theatrical production goes from printed words in a script to a living, breathing three-dimensional work of art. The evening includes a presentation by members of FYT’s creative team, dinner on the FYT stage catered by Fandangles’ and a private performance of To Kill a Mockingbird. The cost is $75 per person with reservations required byApril 11. More information is available by contacting Flint Institute of Music Development at 810-238-1350 extension 147 or online at www.flintyouththeatre.org. — G.G.