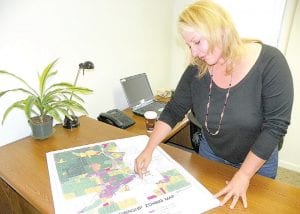 FLINT TWP. — Nick and Jane Panessidi of Swartz Creek just paid $40 for a copy of the township zoning map that they feel is worthless.

The Panessidi’s own and operate the Michigan Wellness Center, 3095 Dye Road, which serves as an information clearinghouse for medical marijuana users.

Their arguments apparently swayed some members of the Board of Trustees who, after taking public comment at their Monday night meeting, voted 5- 2 to again postpone voting on a proposed amendment that passed first reading back in March.

The board also has in place a moratorium on medical marijuana usage that has been extended three times and will expire Oct. 3.

“There isn’t any necessity to rush and pass it at this meeting,’’ said board trustee Frank Kasle. “I think the (ordinance) provisions that some people have spoken about marketing to a wide customer base … either may not be necessary or may be harmful. I don’t think it hurts to clarify these things that have come up.”

The Panessidi’s also argued that the ordinance as written is a threat to their business. They pointed to a clause in subsection 3 stating that “the Michigan Medical Marijuana Act does not authorize marijuana stores, dispensaries, compassion centers or any medical marijuana business that may market to a wide customer base.’’

“If this passes, this includes my business as a medical clinic,’’ Jane Panessidi said. “There is nothing in here that differentiates my clinic from any other marijuana business. If this ordinance passes today there will be no medical marijuana businesses in Flint Township.”

She also argued the ordinance language nullifies the zoning map. Being a caretaker is not a business, she said. Those classified under the medical marijuana law as “caretakers’’ are allowed to provide product for up to five people. They are not going to expense of locating in designated areas when they can operate from their homes for free, she said. Allowed locations are mainly in industrial areas in the southern portion of the township.

Eric Gunnels, who runs a wellness clinic in Clio also spoke during public comment. He said he currently has a court case pending because of discrepancies in his township’s regulations but has had no problems in the seven months his business has operated.

Nick Panessidi said in his opinion the proposed Flint township ordinance goes outside of the law and could spell potential legal problems.

“I don’t think anybody wants to spend their money litigating something that the people have already stated that want and need and accept.’’ he said.

Legal interpretations have been an ongoing hurdle because of conflict between state and federal laws on marijuana usage.

Kasle noted that there now have been separate court cases in Michigan where judges have ruled the state law is unconstitutional based on federal law. The state medical marijuana law was approved by voters in 2008.

Some municipalities are taking a wait and see approach to see how those lower court ruling play out at the Supreme Court level.

Making the motion to postpone voting on the ordinance, Trustee George Menoutes, a retired pharmacist, said too much confusion remains.

“The state and federal government is confused,’’ he said. “Any normal citizen would get confused. I am confused and I know about drugs and I know what classifications drugs are and I know what drugs do.”

The Board of Trustees and the Planning Commission met with their attorney in a workshop meeting July 19 designed to resolve lingering concerns about passing the zoning ordinance amendment.