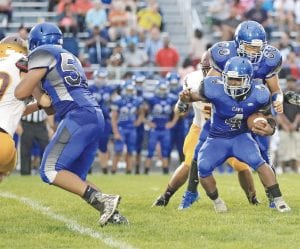 Carman-Ainsworth’s Byron Gates (4) looks for running room as Jonathan Powell (60) has his back.

Fletcher had a hand in four Carman- Ainsworth scores and Byron Gates rushed for the other two six-pointers as the Cavaliers grabbed a 26-0 lead at halftime and never looked back.

“Putting a freshman out there at quarterback can be risky, but we recognized early on that he could be a great one,” said Carman-Ainsworth coach Jerry Parker after watching Fletcher pass for 240 yards and run for 75 more in Week 4.

Fletcher orchestrated a balanced attack that amassed 504 total yards from the line of scrimmage, gaining 274 yards on the ground to go with its 240 yards through the air.

Gates had a lot to do with the prolific Cavaliers’ rushing attack as he ran for 163 yards on 15 carries. Meanwhile, Fletcher’s 12 pass completions landed in the hands of three Cavaliers. Dewayne Gurley caught seven aerials for 75 yards and a touchdown, Troy Brown snared three passes for 83 yards and a pair of scores, and Marreon Givens hauled in two covering 82 yards.

The league win was a big one for the Cavaliers as they moved to 2-0 in the Saginaw Valley League-Blue. Just as importantly, Carman-Ainsworth evened its overall record to 2-2 to enhance its chances of qualifying for the state playoffs at the end of the regular season.

“We don’t like to say that a game is do-or-die, but all of us knew that we had to come out swinging tonight and play together as a team,” concluded Coach Parker. “We knew we had to work harder in practice and right now we feel we have the right pieces in place to succeed.”

Carman-Ainsworth will travel to Flint Northwestern Friday for a league contest against the winless Wildcats. Kick-off is at 7 p.m.