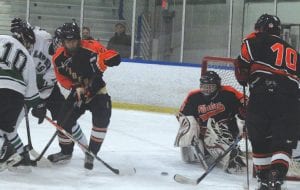 Flushing/Carman-Ainsworth’s Tony Bryan makes a save against Lapeer on Dec. 4 at the Polar Palace.

BAY CITY — Getting into the start of the Saginaw Valley League schedule, the Flushing/Carman-Ainsworth co-op hockey squad made the trek up to Bay County Civic Arena to take on the Bay City Wolves. Unfortunately for the Raiders, the result didn’t come out the way they had hoped, falling to 0-8 on the year with a 10-0 loss to Bay City.

The Wolves fired home six goals in the first period before adding four in the second to close the game out on a mercy rule. Tony Bryan turned aside 20 of the 30 shots that he faced in net and Zach Zettle preserved the shutout for Bay City. The Wolves got two goals apiece from Reid Robson, Carson Eby and Ethan Jacobs while Logan Eby, Chandler Foco, Zach Kraut and Nick Nellett each netted one.

The Raiders will now go on their holiday break, returning to the ice on Jan. 8 against Mt. Pleasant in another SVL battle.