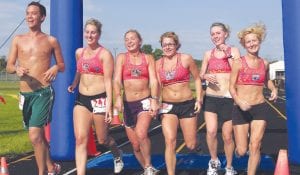 GOODRICH
— Hundreds of runners pounded the pavement last Saturday in Goodrich to remember a loved one that was taken, but not forgotten, far too soon.

The overall winner of the 5k race was Alex Ralston of Holly with a time of 15:48. The overall female winner was Leah Scharl of Clarkston, crossing the line in a time of 18:32.9. Walkers and runners aged anywhere from 4 to 76 years old came out to help raise funds and give away scholarships in Kayla’s name.

Another scholarship was given away at this year’s event. The 2010 Kayla O’Mara Memorial Scholarship given in memory of Ruth O’Mara was given away to students from Grayling High School. This year’s recipients were Alyssa Barnett, Kelsey Newberger, Colin Hamlin, Cayla Johnson, Devon Bobenmoyer and Chelsea Mott.

This race goes on year after year to make sure Kayla is not forgotten. Family members say she inspired others to do their best and this race embodies that.

“We think if she had the opportunity, she would have done a lot of good in the world and this is our way of making sure she is still able to do that,” said Erin O’Mara, Kayla and Kaitlin’s older sister.

Besides the 5k run, the events also included a 5k walk, one mile run/walk and a 10k state championship run. This year, Suzanne Larsen set a new course record in the 10k run with a time of 36:38. For breaking the course record, Larsen received $100 on top of the other awards.

Our partner NBC25 contributed to
this story.