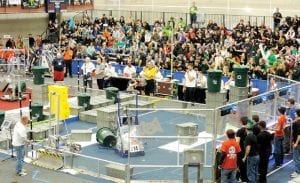 FLINT TWP. — With its newly assembled robot for 2015 competitive season the Carman-Ainsworth High School Megatron Oracles First Robotics Team 314 racked and stacked their way to a first place finish in a qualifying district meet last weekend at Kettering University, according to a press release.

Competing against 40 other teams, Team 314 successfully guided their robot through the Recycle Rush course, a recycling-themed game played by alliances of three robots each. The robots scored points by stacking totes on scoring platforms, capping those stacks with recycling containers and properly disposing of pool noodles (litter).

In an alliance with Team 2337, The EngiNerds of Grand Blanc and Team 5784, V20VH of Vassar. Team 314 not only won the Kettering University FIRST Robotics District Competition but also racked up several other achievements including: 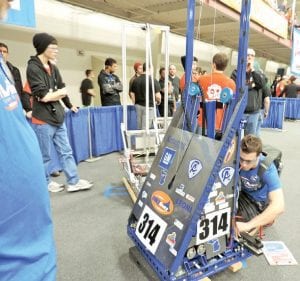 •Played in the Elimination matches and went all the way to the finals.

Team 314 also won the Motorola Quality Award, which celebrates machine robustness in concept and fabrication. The winning team demonstrates these characteristics in many ways from planning through execution. Building the robot is only part of the team’s success. The judges also recognized them as a quality example to others. In the judges’ words: “This team showed forceful robustness in design, build and control with control over the stacks of totes, recycle cans and litter.”

As a result of these efforts, with 73 points earned towards the Michigan FRC State Championship, Team 314 is currently in a three- way tie and in 9th place out of about 228 teams competing in the State of Michigan.

The next competitions are:

• April 8 – 11, the Michigan FRC State Championship in Grand Rapids at the DeltaPlex Arena.