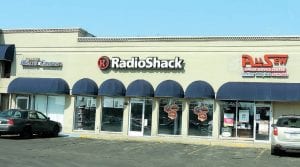 Radio Shack announced it will close 1,100 stores but as yet hasn’t released the list detailing the stores affected by the closings.

FLINT TWP. — It is too early to tell if any of the eight Radio Shack stores in Genesee County will be affected by last week’s corporate announcement that the retail technology and electronics chain plans to close up to 1,100 of its underperforming stores.

Selection of the closing stores will be “ based on location, area demographics, lease life and financial performance … subject to the consent of our lenders under the 2018 Credit Agreement and the 2018 Term Loan,” according to a Radio Shack press release.

Forth Worth, Texas,-based Radio Shack operates two stores in Flint Township – one inside the Genesee Valley Center shopping mall and another in the Yorkshire Plaza, G3306 Miller Road, just west of the I-75 freeway.

According to its online store locator, the company has other local stores at the Grand Blanc Center on South Saginaw; the Davison Shopping Center on S. State Road; at Clio Square on W. Vienna Road,in the Silver Pointe Shopping Center on Silver Parkway in Fenton; and in Flint at the Northwest Shopping Center on Clio Road and at 801 South Center Road at Court street, near Courtland Center shopping mall.

The company has yet to release the list of stores slated to close. The closings are attributed to declining sales.

Operating loss for the fourth quarter was $166.1 million compared to operating income of $16 million last year.

This Radio Shack on Miller Road in the Yorkshire Plaza is among eight operating in Genesee County. The company has yet to release details about which of approximately 1,100 of its stores will be closing.