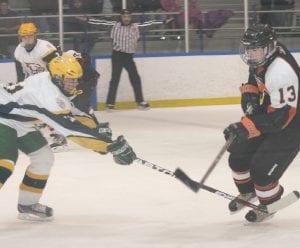 “The game between the two Bay City teams is a rivalry so you never know what will happen,” said Jepson. “Our last couple of games, our work ethic has been tremendous and we’ve tightened up our D-zone. We are where I had hoped we would be at this point in the season. We are just worried about how we play regardless of the opponent and will be coming out strong to compete.”

On the other side of the brackets at the Detroit Skate Club, Grand Blanc was edged out, 5-3, by Clarkston, setting up Flint Kearlsey, which had the early-round bye, with a date with the Clarkston Wolves yesterday. The winners will vie for the regional title Friday at 5 p.m. at Perani Arena.

Last Saturday, Flushing defeated Lapeer East, 10-3, at the Polar Palace in a non-league meeting. East did what it has done much of the season, chipping in a goal within the first two minutes, but in the end, was overtaken by a bigger, stronger team. The first period showed a back-and-forth battle with the Eagles in the mix, 4-2, at the end of the first. Flushing then went on a scoring spree and East was able to only put in one more goal past Flushing’s netminder, Casey Bradshaw.