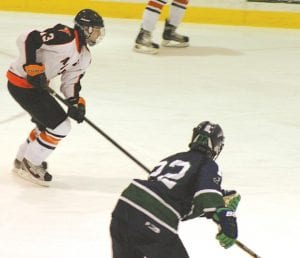 Flushing’s Mickey Montpas drives the puck into the offensive zone on Dec. 15 against Lapeer at Iceland Arena.

FLINT TWP — The Flushing/Carman-Ainsworth co-op hockey squad returned from its holiday break for a pair of contests at Iceland Arena this past Friday and Saturday. Most recently, the Raiders suffered a closely contested loss to Milford on Saturday, 7-6. The see-saw battle began with Milford grabbing a 2-0 edge after the opening frame. Flushing then surged back to grab a 4-3 lead after two periods, but a 4-2 advantage in the final stanza helped Milford seal the 7-6 win.

Drew Sanborn led the way with a pair of goals for Flushing, while Jordy Markranyi added a goal and an assist. Sam Berry recorded a goal and a pair of helpers, as did Josh Fisher. Wesley Liverance scored the other Raiders’ goal. Trevor Sauve, Mickey Montpas, Cameron Bruff, Dewey Miller and Dan Olson each added an assist. Hayden Smith turned aside 37 shots in net.

The story, however, was much different against Mt. Pleasant on Friday, as Flushing cruised to an 8- 3 win at Iceland Arena. The Raiders exploded out of the gate with a 4-0 lead in the first period. Following the conclusion of the second frame, Flushing extended its lead, 6-2. A 2-1 edge in the third period put Mt. Pleasant away for good.

Flushing will be back on the ice on Saturday, hosting Goodrich at Iceland Arena.