Raiders bow out of regional play 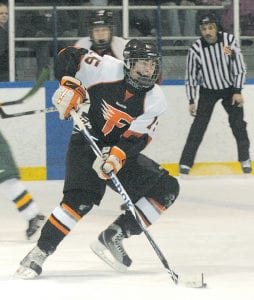 Flushing’s Mickey Montpas made his way toward the goal.

FLINT — The Flushing/Carman- Ainsworth hockey team saw its season come to an end with a 7-0 shutout loss against the Bay City Wolves last Wednesday in the regional semifinals.

The Raiders drew a bye in the preregional round and could only watch to see if the Bay Area Thunder or Bay City would be the opponent for the semifinals. Bay City won out in that one, 3-0, to move on. Junior Casey Bradshaw was in net for Flushing facing 39 shots on goal.

Flushing, 10-13 on the season, had its hands full with the 22-5 Wolves, who ran up a 4-0 lead in the first period. That was increased to 6-0 after the second period, and one final nail was put in the coffin to secure the 7-0 win and regional finals berth against Clarkston.

Clarkston returned the favor in the semis, beating Bay City, 5-4, after shutting out Kearsley, 8-0, in the semis, after it edged Grand Blanc, 5-3 in the pre-regional round. Clarkston is still alive and played Novi in the Div. 1 quarterfinals yesterday.