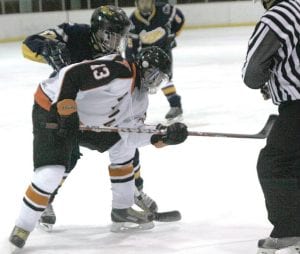 Jordy Makranyi (13) contributed a goal to the win over Linden/Lake Fenton.

FLINT TWP. — The Carman- Ainsworth/Flushing hockey team has been turning heads all season, and defeating teams they were expected to fall to. The Raiders continued rolling on Dec. 21, defeating Linden/Lake Fenton, 8-0, at Iceland Arenas.

Scoring two in the first, five in the second and one in the third, the Raiders retained control throughout the duration of the contest. Nick Brazeal was the statistical leader for the Raiders, scoring twice and adding two helpers. Joe Anderson also tallied twice along with an assist. Both Mickey Montpas and Matt Nagy put up the same numbers, recording one goal and two assists, apiece.

Jordy Makranyi and Andrew Sanborn each rippled the mesh once, while Daniel Olsen posted a pair of helpers, and Michael Livingston picked up an assist. Chad Bundy played a solid game between the pipes for the Raiders, stopping all 11 shots directed his way.

“The team is playing very well right now. This is the most unselfish Flushing has looked in two years, and it shows with victories over good programs,” said coach Jon Jepson. “ We are entering into our toughest stretch of the season with games against Powers, Plymouth, Swartz Creek and Ottawa, Canada, so it is really good to see us playing some of our best hockey, and hopefully we can keep it up.” 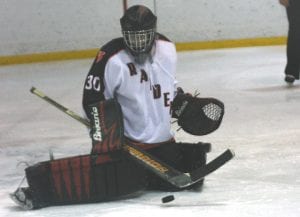 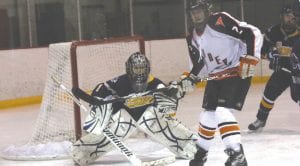 Matt Nagy (2) positioned himself in front of the net in a game earlier this season.