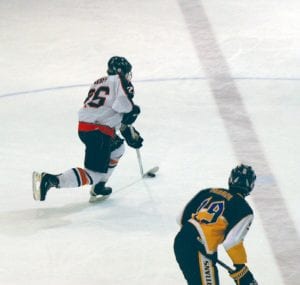 Flushing’s Cameron Bruff skates the puck through the neutral zone.

LAPEER — The Flushing/Carman-Ainsworth co-op hockey squad played a hard-fought game at the Polar Palace on Wednesday, pushing the game all the way to overtime. The extra period wouldn’t be enough for the Raiders to pull out the win, however, falling to Lapeer co-op, 5-4. Flushing led, 2-1, following the opening period, and held a 4-3 advantage after two periods. Lapeer tied the game in the third before putting it away in overtime.

Wesley Livingston would be the first to tally for Flushing thanks to the help of Garrett Shafsnitz and Jordy Makranyi with 11:34 left in the opening period. Makranyi then netted his own goal, assisted by Drew Sanborn with 1:52 remaining in the first.

Flushing was at the Chelsea Showcase this week and travels to Midland today.