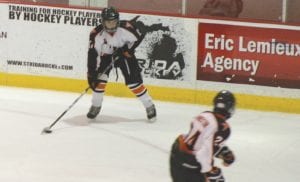 Flushing’s Trevor Sauve looks to move the puck up ice on Jan. 12 against Goodrich.

FLINT TOWNSHIP — It’s been a roller coaster ride for the Flushing/ Carman-Ainsworth co-op hockey team this season. The ups and downs have helped to build character as a squad, as they seem to be surging and getting healthy at the right time. Saturday’s 5-2 win after falling behind, 2-0, was evidence of just that.

“I think it helps (their confidence),” said coach Ben Guzak. “The more evidence they see for themselves, even though you are down, it just takes a couple of good shifts to get a nice momentum swing and right the ship. This was great for their confidnce, they performed well and I’m pretty happy.”

Flushing will be a part of pre-regional No. 8, hosted by Kearsley-Brandon- Holly (KBH United) at Perani Arena. The Raiders open the tournament on Tuesday against Lapeer at 5 p.m. The winner of that contest will face the successor of KBH and Flint Metro League champs Swartz Creek-Clio on Thursday at 5 p.m. Flushing has shown that it can hold its own with the likes of the squads in their pre-regional, and now that they seem to be getting healthy, the Raiders could be a serious threat in the playoffs.

“When we’re all healthy, we have a short bench, like 13 players total, so if everybody is healthy, we had the flu go around, a couple kids got hurt or missing for other school activities, I feel pretty good if we have the complete squad available and healthy,” continued Guzak. “I’m excited and the kids are excited for the pre-regional and hopefully we do well and make it to regionals.”

Flushing/Carman-Ainsworth took on the Tri-Valley Titans Monday and although the Raiders played solid, couldn’t get the win, falling to the Titans, 6-3.

Tri-Valley tallied the lone goal of the first period to take a 1-0 edge into the intermission, then an offensive explosion hit the ice in the second frame, as the Titans outscored the Raiders, 4-2, in the period. Each team lit the lamp once in the third. Jordy Makranyi scored two of the three Flushing goals while Dan Olson found the back of the net for the other.

The Raiders hosted an unfamiliar foe in DeWitt-St. Johns at Iceland Arena on Saturday, and despite falling behind early, exploded for five unanswered goals to secure a 5-2 win. DeWitt- St.Johns held a 2-0 lead following the game’s opening period, but two goals in the second and three in the third propelled Flushing/Carman-Ainsworth to yet another win.

Already down by two, Cameron Bruff cut the deficit in half with a tally at 9:07 of the second, assisted by Makranyi. Bruff then deadlocked the contest less than a minute later, lighting the lamp off of a feed from Olson to conclude the second stanza.

The Raiders then began to pour it on in the third, beginning with Drew Sanborn rippling the mesh at 16:37, assisted by Makranyi, to give Flushing a 3-2 lead, their first of the game. A couple of minutes later, Joey Montpas doubled the Raiders’ lead with an unassisted goal at 14:52. Makranyi put the final nail in the coffin at 1:50, scoring the game’s final goal, assisted by Wes Livingston. Hayden Smith turned aside 25 of the 27 shots he faced on the night.

“We played an awesome second and third periods,” said Guzak. “The kids, they responded pretty well.”

Powers opened the scoring early in the first period and added another pair of insurance tallies in the second frame. Garrett Gormley lit the lamp for Powers just over a minute into the first period on a feed from Connor Jaggi and Jake Stone.

The contest remained 1-0 until Gormley put it past the goal line once again, this time on the powerplay, assisted by Matt Lundeen. Late in the second, Mike Forman found a way to ripple the mesh on a shorthanded goal from Jaggi at 16:48, the game’s final tally. Smith stood quite tall in between the pipes for Flushing, stopping an eyepopping 45 shots.