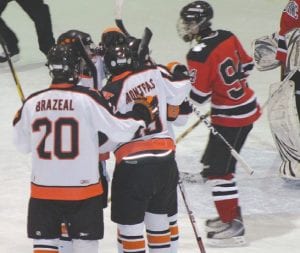 Nick Brazeal (#20) and Michael Montpas (#15) celebrate for the Cavaliers at Perani Arena after a goal.

CHELSEA— The Flushing/Carman-Ainsworth coop hockey team, along with seemingly every other public high school hockey program in the state, headed to Chelsea this past week to take part in the 2011-12 Michigan Public High School Hockey Showcase at Chelsea’s multi-rink Artic Coliseum.

The Raiders began the tournament on the Coliseum’s south rink last Wednesday in a match up with Warren Mott. Flushing dominated Mott in every aspect of the contest, and went on to claim victory, 5-0. They then moved over to the north rink on the following day to take on Chippewa Valley. The Raiders battled throughout the entire contest, but were not able to hold on. Chippewa Valley skated on to a 4-3 triumph.

With the end of the regular season drawing quite close, the Raiders prepare to embark on an extremely important stretch to cap the year. It began on Wednesday after press time, when Flushing traveled to Perani Arena in Flint for a marquee Big Nine match up with Flint Powers Catholic, who the Raiders defeated earlier this season. After that, Flushing will wrap up its conference schedule on Saturday when the Raiders host the Davison Cardinals at Ice Mountain. The Raiders’ regular season will come to an end on the road Monday when they travel to take on Saginaw Swan Valley.