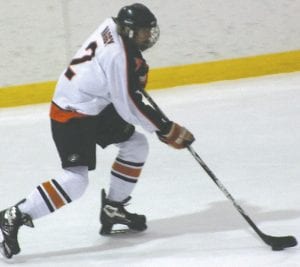 SAGINAW— In their final regular season game, the Carman-Ainsworth/Flushing hockey took on Swan Valley-Hemlock on Monday. Although it was a tightly wound battle, the Raiders were not able to hold on, falling, 5-4, in a shootout.

Nick Brazeal, Mickey Montpas, and Drew Sanborn each matched each other atop the Flushing score sheet, with each recording a goal and an assist. Matt Nagy scored the lone other Raiders’ goal.

“We are having troubles closing out games right now,” said coach Jon Jepson. “Again, we started out hot going up 3-0, but slowly let Swan Valley back in the game and we weren’t strong enough to hold them off in the end.”

With a share of the final Big Nine title on the line, the Flushing hockey team hosted longtime foe Davison at Flint Iceland Arenas on Saturday. The Raiders fought hard but came out on the short end of the stick against the Cardinals, 4-2.

Davison would be the first to light the lamp in the contest, as Steven Stull and Kyle Workman set up Brandon Pirtel with 6:43 remaining in the opening period. The Raiders responded late in the frame, when Montpas found Jordy Makranyi, who buried it to draw even heading into the intermission.

The second period began slow until the Cardinals turned up the heat near the midway point. Alex Dunckel scored with assists credited to Bobby Crawford and Drew Vandeputte to take back the lead. The Cards would extend that lead moments later, as Crawford and Steven Arterburn found Dunckel for yet another goal.

Flushing then began to get the offense rolling, and it led to Gavin Williams cutting the deficit to just one, thanks to assists from Montpas and Makranyi. That led to a third period that saw just one goal, which came from Davison’s Kyle Wendel, securing the 4-2 win for Davison. Casey Bradshaw stopped 21-of-25 shots he faced, while Cardinal David Arterburn turned aside 20- of-22.

It was a much different story when Flushing and Flint Powers Catholic met back in December. Flushing’s program was hitting an all-time high, beating teams of well respected hockey programs. The Raiders would shock local hockey enthusiasts by taking down the Chargers, one of the more solid programs in the area.

The Raiders were not able to repeat that feat in their rematch at Perani Arena last Wednesday, as Flint Powers Catholic clinched a share of the final Big Nine conference hockey championship by trumping the Raiders, 6-2.

Powers jumped out to an early 2-0 lead with first period goals from Colton Korhonen and Garrett Gormley. Korhonen lit the lamp again early in the second frame to extend the Powers lead, 3-0.

Flushing finally found the back of the net when Nagy scored unassisted with 11:37 remaining in the second period. The goal lit a new found spark for the Chargers, who scored two more goals in the next four minutes with tallies from Gormley and Jake Stone, padding the Chargers’ lead, 5-1. Brazeal scored late in the period to cut the deficit to three.

The Raiders were unsuccessful at carrying that momentum into the third, and Powers capitalized with a dagger goal from Korhonen, sealing his hat trick, as well as the win for Powers, 6-2. While Nagy and Brazeal scored the lone Flushing goals, Daniel Olsen recorded an assist on Brazeal’s goal.

With the regular season now at its conclusion, the Raiders will ready themselves for the post season. Flushing will compete in Pre-Regional 8 at Perani Arena, and they will open up with a match-up against host Flint Kearsley at 7 p.m. on Feb. 28.