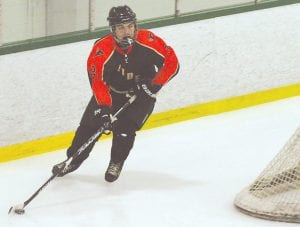 Flushing’s Sam Berry skates the puck behind the net against Goodrich on Nov. 30 at the Polar Palace.

FLINT TWP — It turned out to be a high-scoring affair, but the Flushing/Carman-Ainsworth co-op hockey team was able to knock off the Dragons of the Swartz Creek/Clio coop squad, 9-6, Saturday night at Flint Iceland Arena. Creek/Clio led Flushing, 2-1, after the opening period, but an offensive surge from the Raiders in the second and third periods helped lead the orange and black to yet another victory on the young season.

The Dragons began the game by quickly grabbing a two-goal lead on tallies from Tyler Ladd at 16:42 and Brandyn Matte at 9:02. Flushing, however, would respond late in the frame as Drew Sanborn scored off of a pass from Jordy Makranyi to cut the lead to one at the intermission.

As the second period began, the Raiders started to grab the momentum and used it to even the score on a Jordy Makranyi goal at 16:04, assisted by Sanborn and Gavin Williams. Makranyi continued on his hot streak with a goahead goal from Sanborn at 13:03, however, it was quickly met with a Nick LaJoie goal to draw even, 3-3.

Less than a minute later, Flushing regained its advantage thanks to Trevor Sauve finding the mesh on assists from Makranyi and Sanborn. LaJoie tied the score once again at the 5:37 mark before Joe Montpas fired one home on a pass from Josh Fisher to give Flushing a 5-4 lead heading into the final stanza.

Montpas took that surge into the third period and extended the Raiders lead, 6-4, early in the frame with assists credited to Makranyi and Sanborn. Creek/Clio, however, wouldn’t go down without a fight. Matte cut the Flushing lead to just one with a goal at 11:46. That would be answered with consecutive Raiders’ tallies from Sam Berry and Dan Olson at 11:10 and 5:51, respectively.

Creek/Clio’s Zach Atwell would score once more, but it would be too little, too late, especially after Sanborn picked up an empty-net goal with 30 seconds remaining to seal the win.