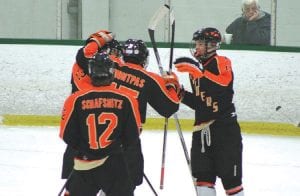 The Flushing hockey team celebrates a goal during an early season match up with Goodrich at the Polar Palace in Lapeer.

MIDLAND — The Raiders headed up I-75 to ignite a new rivalry within the reformed Saginaw Valley League on Wednesday, traveling to the Midland Civic Arena to take on the Midland Chemics. Flushing got down early and tried to battle back, but it wouldn’t be enough in a 5-2 loss.

Midland hopped out to a 2-0 lead after one and doubled that production in the second period. The Raiders tallied one in the second and one in the third during the contest. Mickey Montpas picked up a goal for Flushing, as did Jordy Makranyi. Jeff Fisher and Joey Montpas were each credited with an assist. Hayden Smith turned aside 36 of Midland’s 41 shots.