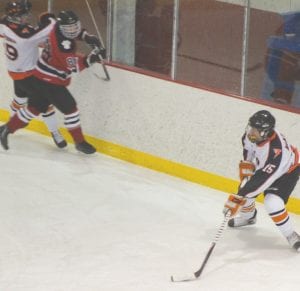 Flushing/Carman-Ainsworth’s Mickey Montpas skates behind the Grand Blanc net, looking for an option out in front.

The Raiders took little time getting on the board, as Mickey Montpas scored from the top of the crease, with assists from Andrew Sanborn and Jordy Makranyi.

The Bobcats would draw even by the end of the frame when Graham Jackett and Gabriel Neil picked up helpers on a Mitchell Tomczak goal. Flushing regained the lead with the lone goal of the second period, a tally from Dewey Miller. Montpas picked up his second goal of the game early in the third, extending the Raiders’ lead, 3-1.

Hunter Moran would soon cut the deficit to just one, followed by a Trevor Gardner goal, knotting the game, 3-3. The Raiders would sever the tie once again, as Sanborn scored with helpers from Makranyi and Montpas. Makranyi would ice the win with an empty-net goal, 5-3.

“It was a big win for us,” said Carman- Ainsworth/Flushing coach John Jepson. “Probably the biggest win we’ve had since I’ve taken over the program, playing a very good Grand Blanc team. They’re very deep.”

With only 17 skaters, the Raiders attributed the victory to hard work.

“It was a full team effort,” continued Jepson. “All three lines contributed, and the defense played well with the return of Joe Anderson. He really solidified that defensive core.”