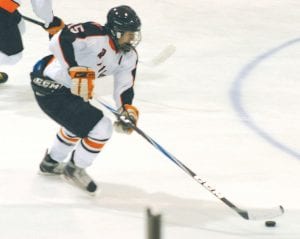 Flushing’s Mickey Montpas drives the puck through the neutral zone during Saturday’s win over Lapeer.

FLINT TWP — It wasn’t easy, but the Raiders were able to get the job done in a closely fought battle against Lapeer at Flint Iceland Arena on Saturday. The back-and-fourth contest concluded with Flushing on top, 4-3.

Trailing, 1-0, early on, the Raiders got the equalizer when Sam Berry hit Drew Sanborn, who fired it home for Flushing’s first tally. Sanborn did it again early in the second period, this time from Jordy Makranyi, evening the score once again, 2-2.

To take the lead, however, it was the chemistry of the Montpas brothers. Mickey Montpas scored on a feed from Joey Montpas to cap the second period with a 3-2 lead. Lapeer would draw even in the third, but Makranyi put their final surge to a halt and netted the game-winning goal.

The win bolstered Flushing’s record to 6-3 overall, as they traveled to Perani Arena to take on Davison following our Wednesday deadline.