Raiders lose pair on the road 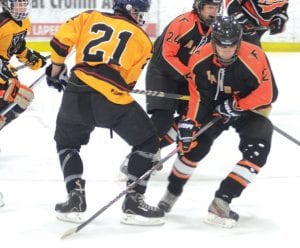 Flushing’s Garrett Schafsnitz battles for the puck during Saturday’s loss to Alliance.

LAPEER — The Flushing/Carman- Ainsworth hockey co-op traveled east of Genesee County on Saturday night to the Polar Palace in Lapeer to take on the Alliance, a co-op squad comprised of LakeVille, North Branch, Dryden and Goodrich, suffering another tough loss, 11-3.

All three of Flushing/Carman- Ainsworth’s goal came in the second period and all were converted by Joe Montpas.

Flushing hit the road last Wednesday as well, facing off with the FNV Griffins, resulting in an 8-0 loss for the Raiders. The Griffins forced the mercy rule into effect after a six-goal first period followed by two more tallies in the second frame.

Flushing, now 0-4, traveled to the Polar Palace again on Wednesday, which followed our press deadline, to take on the Lapeer co-op. — B.P.