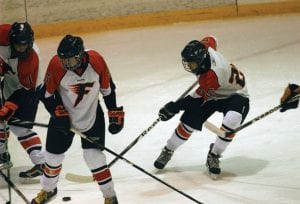 Flushing’s Kevin Wilson (No. 25) battles for the puck at the feet of his teammates last Wednesday when the squad played visiting Goodrich.

Flushing was in the game trailing just 1-0 after the first period, but Swan Valley kicked into overdrive scoring five goals in the second and one in the third to seal the win. Flushing’s two goals came in the third period off the sticks of Michael Montpas and Matt Nagy with Joe Anderson making 27 saves on 34 shots he faced. The loss drops Flushing to 5-5-1 overall on the season.

Last Wednesday, Goodrich started out very strong against the Raiders and jumped out to an early lead to eventually take the game, 8-2.

The Martians remained on cruise control for the rest of the game, scoring 38 seconds into the opening period when Trevor Troupe scored unassisted. Troupe scored again at the 8:47 mark of the first period from a feed from Tyler Reed. Trevor Bushnell then buried the puck from Jake Brejnak and Mack Pfeiffer. Brejnak finished the scoring at the 1:04 mark of the first period with Bushnell returning the favor along with Pfeiffer assisting on the goal. Flushing got on the board with 27 seconds remaining with a goal by Michael Montpas assisted by Drew Sanborn and George Makrani.

The second period started with Troupe scoring 33 seconds into the period with a feed from Reed. Rocky Hatton scored a shorthanded goal assisted from Troupe, and Brejnak also scored shorthanded just 22 seconds later with an assist from Pfeiffer. Flushing scored its second goal of the night, again by Montpas, assisted by Sanborn and Anthony Reffert. Troupe scored his fourth goal of the night with 24 seconds remaining from a Bushnell assist. Neither side scored in the third period. Larson stopped 25 of 27 shots, and Casey Bradshaw stopped 17 shots for Flushing.

Flushing is off the ice until Saturday when it takes on Fenton at Iceland Arenas at 6:30 p.m.