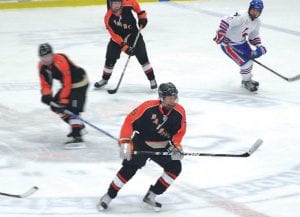 Flushing’s Mickey Montpas turns back toward the puck during a game against KBH United at Perani Arena last season. Montpas scored one of the Raiders’ two shootout goals to top Unity at the Ludington Tournament last weekend.

LUDINGTON — The Flushing hockey team, which co-ops with Carman-Ainsworth, opened its season at this past weekend’s Ludington Tournament. The Raiders found themselves on both ends of the spectrum, beginning the tournament with a 6-3 loss to Manistee. Flushing rebounded in dramatic fashion in the consolation game, pulling out a 10-8 shoot-out win over Unity to cap its season-opening performance.

The third period concluded in a 3-3 deadlock and the five minute overtime would not be enough to decide a victor. In regulation, the Raiders found the back of the net on several different occasions, including goals from Drew Sanborn, Jordy Makranyi, Mickey Montpas, Trevor Sauve and Joe Montpas, just to name a few.

Haden Smith was between the pipes for the Raiders, and although regulation was a high-scoring affair, Smith held strong in overtime and the shootout to help his squad secure its first win of the season. The three-man shootout resulted in Flushing outscoring Unity, 2-0, on crucial goals from Makranyi and Mickey Montpas. The pair of seniors were a pivotal part of the team last year and have already carried some of that momentum into the young season.

Now at 1-1 overall to start the year, the Raiders traveled to Freeland yesterday. Flushing then hits the road to the Polar Palace in Lapeer on Friday to take on Goodrich before hosting Saginaw Swan Valley on Saturday at Flint Iceland Arena.