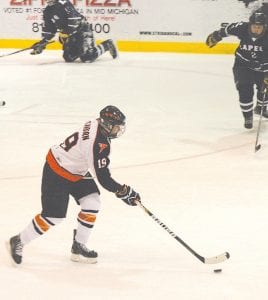 Flushing’s Drew Sanborn skates the puck out of the defensive zone during a game against Lapeer at Iceland Arena on Dec. 15.

FLINT — Although the Flushing/Carman-Ainsworth coop hockey squad has solidified itself as one of the better programs in the area, the Raiders still weren’t able to get past Davison, a perennial powerhouse on the ice, during last Wednesday’s 4-2 loss at Perani Arena.

Davison opened the scoring at 2:57 of the opening frame as Peyton Thiel and Drew Vandeputte helped set up Connor Cowan’s go-ahead goal. Jordy Makranyi evened the scored for the Raiders on an unassisted tally at 11:57.

“He’s a real good player,” Davison coach Dough Towler said of Makranyi. “We turned the puck over and he went up over the shoulder of Ricky Gonzalez. It was a perfect shot by Makranyi.”

Davison rallied around that, however, and lit the lamp once again with a Jason Raske power play goal at 13:28 with assists credited to Tony Hazel and Mitchell Margitan. The second period would see a response from the Raiders, as Makranyi and Dan Olson set up Trevor Sauve for the equalizer at 6:33. 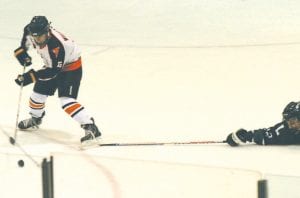 Flushing’s Gavin Williams skates around a sprawled defender against Lapeer on Dec. 15.

Davison would once again regain the lead, never to look back, as Cowan scored on the power play from Tony Hazel and Mitchell Margitan at 9:40. Davison put in an insurance goal with 24 seconds remaining in the second stanza when Vandeputte tallied from Margitan and Connor Cowan. Flushing outshot the Cardinals, 20-17, on the night.

The Raiders are now off for the holidays and will be back on the ice on Jan. 4, hosting Mt. Pleasant at Flint Iceland Arena.