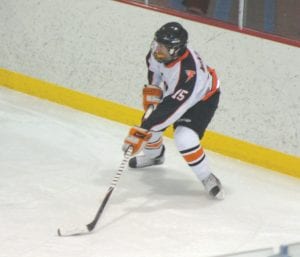 Flushing’s Mickey Montpas assesses his options from the corner.

FLINT TOWNSHIP — The Carman-Ainsworth/Flushing hockey team has not been in action since its big win over conference foe, and perennial powerhouse, Flint Powers Catholic in late December. The Raiders were scheduled to return from the holiday break with a match up against Swartz Creek-Clio, but the game was canceled due to the death of yet another Flushing student.

Then last Saturday, the Raiders were supposed to hit the road to take on future Saginaw Valley Conference opponent Mt. Pleasant, but a massive flu outbreak in the Mt. Pleasant school system forced all school related activities to be shut down for the remainder of that week.

The Raiders finally hit the ice last Saturday at Flint Iceland Arenas, knocking off visiting Hudsonville, 7-3. Jordy Makranyi opened up the scoring with assists from Mickey Montpas and Daniel Olson. Matt Nagy found Garrett Schafsnitz for the Raiders’ second tally, and Olson and Makranyi assisted on Nick Brazeal’s goal, capping the first period with a 3-1 lead.

Hudsonville drew closer with the lone goal of the second frame, 3-2. The Raiders would erupt in the final period with four goals. Makranyi would be the first of those goals, assisted by Montpas and Brazeal. Then Montpas would ripple the twine, with helpers from Makranyi and Olson. Olson continued to rack up points, as he assisted on another Makranyi goal.

Brazeal would score the final goal of the game for the Raiders, as he was assisted by Olson and Hunter Miller, sealing the 7-3 win for Carman- Ainsworth/Flushing. Chad Bundy had a solid game in net, turning aside 26 of the 29 shots he faced.

“We were a little sloppy at times due to not playing a game in two weeks,” said coach Jon Jepson. “But the boys never stopped working and were able to add a few more at the end to secure the win. Hopefully, we got the rust off and are ready to go on Saturday against Fenton, that is playing very well right now.”