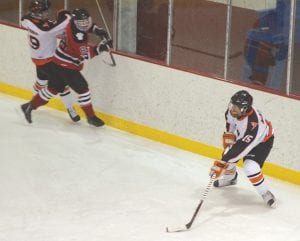 Mickey Montpas and the Carman-Ainsworth/Flushing co-op hockey team has had a lengthy break, but will return to the ice tonight to take on last year’s Flint Metro League champions, the Swartz Creek Dragons, who are now combined with the Clio Mustangs as Swartz Creek-Clio.