Raiders runners-up at Manistee Shoot out 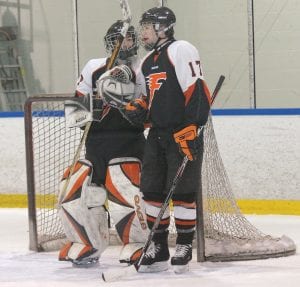 Flushing’s Hunter Miller conferred with goalie Casey Bradshaw during a break in the action.

MANISTEE
— It wasn’t the trophy the team had expected to bring home after the Thanksgiving holiday, nonetheless, it was a trophy for the Flushing/Carman-Ainsworth hockey team after defeating Kalamazoo, 5-3, on Friday, but falling to host Manistee, 4-2 on Saturday.

Against Kalamazoo, Flushing’s Matt Leland scored in the first period on an assist from Mickey Montpas, then Montpas scored assisted by Leland.

Second-period goals came from Blake Schafsnitz assisted by Montpas and Josh Williams and Leland with a feed from Matt Nagy. George Makrani scored the lone Flushing goal in the third period assisted by Tony Reffert and Drew Sanborn.

In the finals, Flushing would be denied on its shots on goal until the third period, when Makrani lit the lamp assisted by Montpas and Montpas scored assisted by Leland.

“The team is doing well, but we are still looking for consistency in the overall game to put three periods of hockey together,” said coach Jon Jepson. “The work ethic is there, but we have to get past the mental breakdowns to play three solid periods. While it’s not the trophy we wanted to come home with, we did come home with a trophy.”

Flushing gets back at it Friday against Haslett in Lansing, then hosts Lapeer East Saturday at Iceland Arenas at 5 p.m.

Last week’s game against Goodrich was postponed by Goodrich and has been rescheduled for Jan. 5 at Iceland.