Raiders’ season comes to an end in overtime 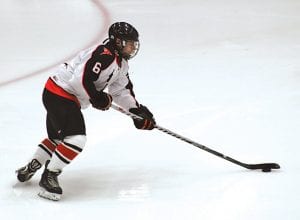 Flushing’s Gavin Williams drives the puck through the neutral zone during Tuesday’s playoff loss to Lapeer.

FLINT — There were blizzard-like conditions in the atmosphere on Tuesday, but the Flushing/Carman- Ainsworth co-op hockey team was able to get its playoff opener underway at Perani Arena in Flint. Despite holding a slim lead late into the game, the Raiders were unable to get past the Lapeer coop hockey team in a 4-3 overtime loss.

The first period concluded in a 1-1 deadlock, but two goals for the orange and black in the second stanza gave them a 3-2 edge heading into the final frame. Lapeer then evened the score late in the frame and iced their win with a goal in the extra stanza.

The scoring began at the 16:27 mark of the first period, as Lapeer’s Jacob Morrell burned the net off of a feed from John Curlett to grab a 1-0 advantage. Flushing wasn’t going away that easily, however, evening the game four minutes later when Sam Berry assisted on a Jordy Makranyi goal to draw even.

Around the midway point of the second frame is when Flushing earned its first lead of the day, as Cameron Bruff cashed in a goal, assisted by Mickey Montpas, at 11:31. With about four minutes remaining in the period, Makranyi extended the Raiders’ lead, rippling the mesh with assists credited to Montpas and Trevor Sauve. Lapeer then began to surge and drew within one goal on an unassisted shorthanded tally from Curlett with 33 seconds remaining in the period.

The lone goal of the third period came at the 5:33 mark, as Lapeer’s Matt Hunyady found the back of the net, assisted by Parker Westphal and Dan Kirsammer, which sent the game to overtime. The Raiders’ season came to a halt at the 6:00 mark of the extra period when Joe Delvecchio lit the lamp, which was set up by Brad Szczesny and Bill Miller, sealing the 4-3 win.