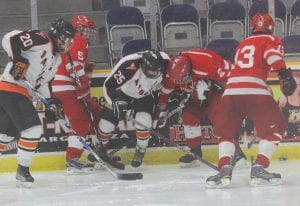 Flushing/Carman-Ainsworth’s Kevin Wilson (25) fights for the puck along the boards, while teammate Nick Brazeal (20) skates in to help against Swartz Creek/Clio.

FLINT— The Flushing/Carman- Ainsworth hockey team surprised a lot of people this season by defeating teams that they normally struggle against, such as Flint Powers Catholic. Flushing/Carman-Ainsworth’s magical run came to its demise last Thursday at Perani Arena in Flint, where it was ousted from the regional playoffs by Swartz Creek-Clio, 5-2.

The Dragons capitalized on the Raiders’ mistakes early in the contest with two first-period goals. Tyler Dodge would be the first to tally with an assist from Connor Houle, which was followed by Nick Lajoie scoring with help from Houle and Derek Makimaa.

The second frame would see Creek- Clio extend its lead to three, as Lajoie helped set up a scoring play to Josh Smith, who buried it to increase the Dragons’ edge, making it 3-0 after two periods. Smith got right back to it in the final stanza, as he lit the lamp with a helper credited to Trenton Sheick, giving Swartz Creek-Clio a four-goal lead. Flushing finally ended the drought when Nick Brazeal found the back of the net thanks to the passing of Joe Anderson and Matt Nagy, cutting the deficit, 4-1.

Creek jumped back into a four-goal lead when Makimaa, the hero of Wednesday’s dramatic double overtime victory over Grand Blanc, put it past the goal line, as Houle and Smith assisted, making it 5-1. Brazeal would score again with help from Nagy, but it was too little, too late, as the Raiders’ season concluded with a 5-2 defeat. Chad Bundy turned aside 26 of the 31 shots he faced, while Swartz Creek-Clio’s Justin Trebtoske stopped 29-of-31.

“It was a very good game,” said coach Jon Jepson. “I think it was a lot closer than the score indicated. It was one of those nights that the bounces didn’t go our way and Swartz Creek has a very good team that played very well.”

The loss ends Flushing’s season with an overall record of 14-12. The Raiders picked up big wins during the year over Grand Blanc and Flint Powers Catholic. Flushing hadn’t beaten the Chargers in 31 years.

“I was just very happy that our boys played hard until the final buzzer and never quit,” added Jepson. “Our kids, and especially our seniors, can leave with their heads held high on a great game and more importantly a great season.”