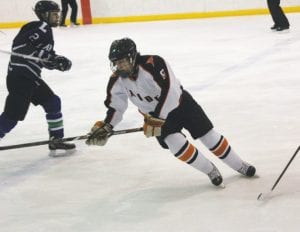 Flushing’s Joe Montpas chases the puck through the neutral zone during a Jan. 25 game against Lapeer.

Alliance took a 2-0 lead into the first intermission before racking up four more in the second frame. The final two goals came in the third.

Goaltender Jeff Fisher had a big night between the pipes, recording 40 saves in the season finale. Alliance got two goals each from Adam Green and Tim Ratliff while Mitchell Bushnell, Zach Giegler, Austin Henrickson and Mitchel Wildey all tallied once.

Saturday’s match up at the Tri-Valley Titans was canceled and will not be made up.

A game of ups and downs nearly finished with the Raiders earning their first win of the year at Iceland Arena on Wednesday, however, they came up just short in a 9-8 overtime loss to KBH United (Kearsley/Brandon/Holly).

Flushing held a 3-1 lead following the conclusion of the first period before both teams exploded for five goals in the second period. KBH, though, pitched a 2-0 shutout in the final stanza of regulation before converting a goal in the extra period to take the win.

Several Raiders had huge games, including Wes Livingston, Cliff Ogle and Trevor Sauve, who each racked up two goals and two assists apiece. Jeff Fisher and Joe Montpas rippled the mesh once each and Garrett Schafsnitz picked up a pair of helpers.

Tony Bryan made 28 saves for Flushing on 37 shots on goal. The Raiders’ offense mustered up 48 total shots. — B.P.