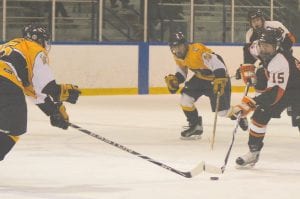 Flushing’s Mickey Montpas rushed the puck against Goodrich at the Polar Palace in Lapeer last Saturday.

The Martians scored with 5:31 remaining in the first when Trevor Bushnell scored off a feed from Sam Brauer and Brendan Woodruff, but Flushing had the answer with two goals to pull ahead, 2-1. Mickey Montpas scored at 12:35 assisted by Jordy Makrani and Tony Reffert, then Drew Sanborn lit the lamp at 4:23 assisted by Matt Leland.

A scoreless second period showed the solid defense from both squads, but Flushing flexed its muscles in the third with Leland scoring at 14:44 assisted by Nagy.

Goodrich wasn’t done yet, though, and scored its second and final goal at 7:44 from Rocky Hatton with the assist going to Bushnell.

Leland scored at 7:14 to up the ante assisted by Olson and Sanborn and Blake Shafsnitz tapped in the gamewinner in the final 25 seconds off a pass from Nagy. Casey Bradshaw was in goal and although his saves were not recorded, coach Jon Jepson noted that he made many good saves against a strong Goodrich squad.

The Raiders, 8-8-1 overall, 0-2 Big Nine, are at the Durand Invite Friday against Durand then take on either Freeland or Grand Ledge on Saturday depending on how Friday’s game turns out.

Matt Nagy needed just three seconds to open the scoring in the first for Flushing, then Kearsley scored two goals to lead, 2-1.

Nagy opened the second period scoring 30 seconds in assisted by Olson and Jordy Makrani, then Kearsley scored again. At 8:27, Blake Shafsnitz scored for Flushing assisted by Mickey Montpas. At 12:33, Matt Leland kept Flushing in the game assisted by Montpas and Shafsnitz.

In the third, Olson scored unassisted 2:58 into the period, and that goal was answered by Kearsley. At 3:55 into the period, Nagy ripped the net assisted by Shafsnitz and Olson to overtake the Hornets.

“The team played very well allaround disciplined hockey,” said Flushing coach Jon Jepson. ‘We were able to stay out of the box when we needed to and our ability to continue to keep fighting for the win made the difference for us.”