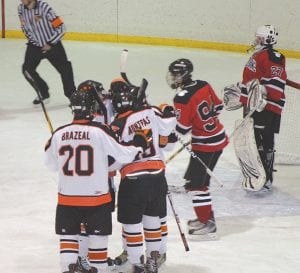 FLINT TOWNSHIP— The Carman- Ainsworth/Flushing hockey squad has really found its stride throughout the past few contests.

The team took another step forward last Tuesday, a big one at that, as it defeated perennial hockey powerhouse Flint Powers Catholic, 4-2.

Powers took the early lead in the first period, but would be knotted at one apiece heading into the intermission after Jordy Makranyi responded a few minutes later, with an assist to Mickey Montpas. Powers would be the only team to light the lamp in the second frame, claiming a 2-1 lead heading into the third period.

The Raiders began to shift the momentum, surprisingly on the penalty kill. Nick Brazeal would ripple the mesh for an unassisted short-handed goal, drawing even once again. The Raiders grabbed their first lead of the night when Michael Livingston and Andrew Sanborn connected with Montpas for the 3- 2 edge.

Carman-Ainsworth/Flushing would put the icing on the cake moments later, when Montpas put the puck into the empty net, sealing the 4-2 victory. Goaltender Chad Bundy faced 34 shots, stopping 32 of them.

“It was the first time that Flushing had beaten Powers in 11 years,” said coach Jon Jepson. “So its a very big win for the program and the team.”

Although probably underestimated prior to the start of the season, the Raiders have begun to make a strong case for themselves as one of the better teams in the area.

“The kids are riding a high right now and playing very well. They’re playing good, unselfish, team hockey, and they’re starting to believe in themselves,” continued Jepson. “Our biggest win to date, by far, since I’ve been involved. Couldn’t be happier for the boys and how we’ve been playing. They deserved the win. Anytime you can beat a team that goes far into the state tournament every year, its a great thing for the program.”