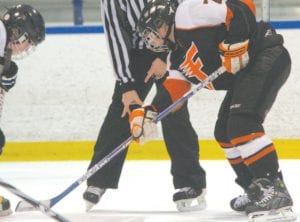 Flushing’s Jeff Fisher looked for the puck to drop against an opponent earlier this season.

FLINT
— It’s hard to come from behind to win any athletic contest, especially when you are playing at the high-school level.

The Flushing/Carman-Ainsworth hockey team showed just how tenacious it can be when it posted a 5-4 come-from behind win over Madison Heights Lamphere Monday in a reschedule game delayed from bad weather earlier this month.

Trailing, 4-0, in the second period after Lamphere surged out to a 3-0 lead with goals at 14:39, 14:28 and 11:40, Flushing changed the sway of the pendulum to its favor when Matt Leland scored at 9:34 assisted by Drew Sanborn and Mike Montpas, then again at 7:38 assisted by Jodry Makrani. Sanborn would pull Flushing to within one at 2:22 off a feed from Matt Nagy.

Flushing carried the momentum into the third with Jeff Fisher evening up the score at 12:56 assisted by Hunter Miller and Dewey Miller. Sanborn got the game winner at 2:37 off a pass from Joe Anderson.

“The kids just showed a lot of character being down 4-0,” said Flushing coach Jon Jepson. “They could have folded, but they stayed in it and showed great character for the win.”

It was a different situation last Saturday against Haslett, when the Raiders gave up a 3-0 lead, but held Hartland at bay to preserve the tie.

Leland opened the scoring at 8:43 in the first assisted by Anderson, then with 43 seconds left Makrani scored unassisted.

Nagy lit the lamp at 11:53 in the second, but the Eastside Stars scored at 9:22 assisted by Ryan Tyrer.

The third period would prove tough for Flushing after Chris Hagan scored for the Eastside Stars assisted by Brett Graham and Tyrer at 11:05, then got the equalizer with 41 seconds left by Harris assisted by Tyrer and Graham.

In overtime, Flushing’s mettle was proven as they held Hartland from scoring, while missing out on its own scoring opportunities.

“It was probably our sloppiest game of the year, but even after that to give up three goals and hold them back in overtime, the kids were able to pull it out for the tie,” Jepson added.

Flushing is off the ice until its meeting with Flint Powers Dec. 29 at Iceland at 6 p.m.