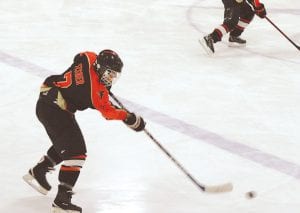 Flushing’s Jeffrey Fisher skates up ice with the puck against Goodrich at the Polar Palace.

FLINT TWP — The Flushing/Carman-Ainsworth co-op hockey team has looked quite impressive recently, and after knocking off the Metro League Griffins at Iceland Arena on Tuesday, 4-3, the Raiders look to be one of the area’s top squads.

The Griffins are a co-op squad comprised of Linden and Fenton, and they gave the Raiders some fits all night long. The score was tied at the end of the first and second periods before Flushing put the final nail in the coffin in the third stanza. Drew Sanborn helped the Raiders grab the initial lead on assists from Jordy Makranyi and Mickey Montpas before Ben Cislo evened the score.

The Raiders jumped right back on top with a Makranyi goal in the second period, but the Griffins got right back to work with a Danny DeLong goal for the equalizer. Once again, Flushiing opened the period by grabbing the lead, this time on a Sanborn goal from Mickey Montpas and Dan Olson, and just as in the first two periods, the Griffins drew even on a Nate Allen tally. Gavin Williams and Sam Berry, however, helped set up the game-winner, scored by Makranyi, to ice the win.

Flushing suffered a setback in Saturday’s home opener at Iceland Arena, falling to the Tri-Valley Titans co-op squad, 7-2. The Raiders trailed after one, 3-2, before Tri-Valley exploded for two goals in the second and another two in the third to secure the win.

Trevor Sauve and Sanborn were the lone goal scorers for Flushing, while Olson picked up helpers on both of the Raiders’ goals. Hayden Smith made 33 saves in the contest.

At the Polar Palace on Friday, Flushing picked up it’s most dominant win thus far, slamming the door shut on Goodrich, 10-0. The game ended early due to a mercy rule, lasting just two periods.

The Raiders held a 3-0 lead after the opening period, which began with a Makranyi goal early on, assisted by Mickey Montpas. Flushing extended its lead with an unassisted tally from Joey Montpas before Makranyi rippled the mesh again on a feed from Sauve.

The second period, however, is when the flood gates began to open. Sanborn sent the puck to Makranyi who fired it home to complete his hat trick. Moments later, Sanborn picked up a goal of his own, lighting the lamp with assists credited to Sauve and Makranyi. Sanborn then got right back to work in the assists column, feeding it to Dewey Miller for his first goal of the contest.

The Raiders continued to pour it on when Williams netted the puck on an unassisted goal before Berry scored off of a pass from Sanborn. Berry scored yet again, recording his second of the night with an assist from Makranyi, and Flushing put an end to the contest when Mickey Montpas buried Flushing’s tenth tally of the game on assists from Miller and younger brother Joey Montpas. Smith held strong between the pipes, recording his first shutout of the season.

The Raiders hit the ice for the first time since the Ludington Tournament last Wednesday at Saginaw Bay Ice Arena against the FNV Griffins, which is a co-op squad consisting of Freeland, Saginaw Nouvel and Saginaw Valley Lutheran. Flushing couldn’t parlay some of the momentum from its dramatic win at the Ludington Tourney, as it dropped their matchup with the Griffins, 12-4.

The Griffins struck first early in the first as Ben Rybicki fed Robert Brennan for the game’s initial tally, but the Raiders answered later in the opening frame with a power play goal from Sanborn, assisted by Makranyi. Following that score, however, the Griffins began to catch fire. In fact, they ended the period with three consecutive goals in the final 6:36 on two tallies from Brennan and one from Josh Koepplinger.

Flushing jumped right back into the game, seizing the opportunity early in the second period as Mickey Motpas rippled the mesh at 15:11. About halfway through the stanza, Makranyi came though with a goal to cut the Griffins’ lead to just one, 4-3. FNV refused to sit idly by, putting an end to the Raiders’ streak with a Chantz Graham goal at 8:56. A few minutes later, Makranyi got right back to work, cutting the lead to just one with his second score of the game.

Just as they did to cap the opening period, however, the Griffins ripped off another three consecutive goals as Graham, Ryan Collins and Austin Popour extended the FNV lead, 8-4. The Griffins capitalized on the momentum entering the final stanza, outscoring the Raiders in the period, 4-0. Collins picked one up, Koepplinger put it in the net twice and Conner Vondette scored in the third, as well. Smith was in net for Flushing, turning aside 23 shots on the night.

Flushing will now prepare to take on Swartz Creek/Clio on Saturday.