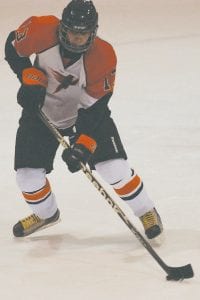 FENTON — The Carman- Ainsworth/Flushing hockey team stubbed its collective toe when it faced off against Metro League Fenton at Fenton last Wednesday, losing the battle, 5-3.

Flushing scored the first goal of the contest at 11:08 when Drew Sanborn made good on a pass from Jordy Makrani, then Matt Nagy upped the Raiders’ lead to 2-0 on a goal at 6:07 with the assist going to Dan Olson and Jeff Fisher. Fenton began to chip away at the slight edge though, scoring at 3:28 on a solo shot by Tyler Delong to cut the deficit to one.

The Tigers got the equalizer at 3:01 in the second when David Johnson slipped in a solo goal. The pendulum began to sway in favor of Fenton when Delong lit the lamp with 52 seconds in the period assisted by Johnson and Ryan Delecki.

Flushing wasn’t going to roll over, however, and tied things up once again at 14:09 in the third when Nagy scored assisted by Olson and Makrani. Fenton would go on to score the final two goals of the game with Johnson bending the net assisted by Jake Foguth at 9:41 and Ryan Fuller sealed the win at 6:22 off a pass from Josh Esch.