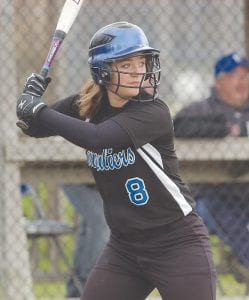 FLUSHING — The weather finally cooperated for area teams on Monday, but the competiton was relentless as Big Nine rival Flushing shut out the Carman-Ainsworth softball team, 12-0, and, 10-0, at Flushing. Carman- Ainsworth’s hitters faced a daunting pitcher in Alyssa Telling, and were only able to get three hits off the hurler.

Last Thursday, the Lady Cavs faced a stingy Clarkston squad that handed them a 17-2, 13-2 doubleheader loss.

Carman-Ainsworth led, 2-0, after the first inning, but eight Clarkston runs in the second started a scoring barrage that included one in the third, six in the fourth and two in the fifth. The Cavs had four hits to Clarkston’s 12.

In game two, the game was tied, 1- 1, after the first inning, but Clarkston again put on a hitting and scoring clinic, tacking on three more runs in the second, five in the third and four in the fourth for the mercy-ruled shortened game. Just like it did in the first game, Clarkston out-hit Carman- Ainsworth, 12-4.