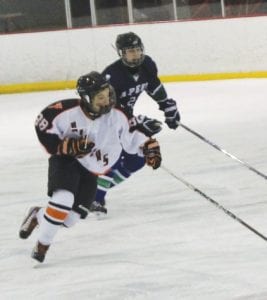 FLINT — The Flushing/Carman- Ainsworth hockey team faced off with some tough foes and concluded the tournament with a 6-2 loss to Lapeer’s co-op squad on Saturday at the Grand Blanc tournament on Friday and Saturday at Perani Arena.

Lapeer tallied two goals apiece in each period, while Flushing tallied both of its goals in the third period.

Joe Montpas set the tone for Flushing, scoring both goals, although not until the third stanza. The same can be said of Lapeer’s Chris Woodcum, who was the game’s top player with three goals. Hunter Williams, Joe Dennis and Tim Fabian also scored for Lapeer.

The Raiders’ luck wasn’t much better on Friday, getting shut out, 8-0 by the Bobcats. Grand Blanc scored twice in the first period before adding three each in the final two frames.

Jack Clary rippled the mesh three times for the hat trick and Foster Grahn, Tyler Sly, Mason Walker, Steven Wedel and Ross Whitehead all found the back of the net once each.

Flushing faced off with Midland at home following our Wednesday deadline in a Saginaw Valley League game at Iceland Arena and will travel to Bay County Civic Arena on Saturday to take on the Bay Area Thunder.