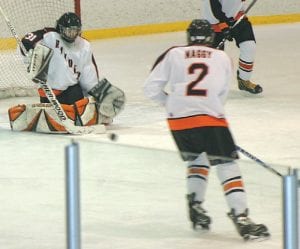 Flushing’s Casey Bradshaw turns aside a slap shot from the blue line during Monday’s game against Swartz Creek-Clio.

FLINT TOWNSHIP — A few weeks ago, the Raiders’ game against Swartz Creek-Clio was postponed due to a suicide death of a Flushing student, which came just weeks after another Flushing student was shot to death in Indiana. That game was made up on Monday, and the Dragons took it to the Raiders, 6-3.

Flushing went down, 1-0, early in the first period when a slap shot from the blue line found its way past Casey Bradshaw at 7:18. With 6:06 remaining, Mickey Montpas evened the score, but the Dragons would tally again with less than two minutes remaining in the opening frame. Two Creek goals in the second period extended their lead, 4-1, before taking a 5-1 lead at the 9:35 mark of the third period.

Jordy Makranyi finally put an end to the Raiders drought, as he scored with 8:30 remaining. Montpas would put in his second of the night to cut the deficit, 5- 3. The effort would not be enough to overcome the Dragons offensive onslaught, as Creek slid the puck into the empty net to seal the victory over the Raiders, 6-3.

“We took a lot of very uncharacteristic penalties and did not play very well as a team,” said coach Jon Jepson. “Swartz Creek-Clio played a very good, hard game and unfortunately, we were unable to keep up with them. When we were able to get some pressure and create scoring opportunities, their goalie, Justin Trebtoske, made some great saves.”

The Carman-Ainsworth/Flushing hockey team was back on the ice last Saturday in a matchup with the Fenton Tigers of the Flint Metro League. The Raiders steam rolled over Fenton for a 6-2 win.

Nick Brazeal topped out the score sheets with two goals and two assists on the night, while Makranyi also lit the lamp twice. Matt Nagy was able to tally, as well as assisting on two other scores. Sanborn scored the other Raiders’ goal to help solidify the victory for the Raiders.

“Against Fenton we played a complete team game,” stated Jepson. “We passed the puck and played very disciplined team hockey.”

The Raiders were back in action yesterday as they faced Goodrich at the Polar Palace.